Star Wars Episode I: The Phantom Menace. What do you want me to say? It’s arguably the weakest link in the Star Wars chain, and starting today, it’s coming to you in 3-D. As a green-minded Twitter poster pointed out over the weekend, it makes you wonder if George Lucas recycles this much at home. Partially due to the 3-D hype, and partially due to the announcement of the MTT (revealed at the UK Toy Fair), it’s time to review the Star Wars Vintage Collection Battle Droid. 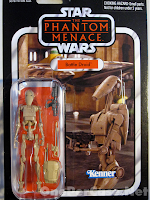 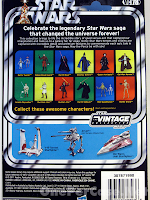 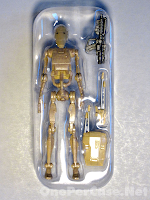 Ok, so technically this packaging can’t really count as “nostalgia”, but it can definitely count as retro. Personally, I think the prequel stuff looks great on the Vintage Collection packaging. It’s a large picture of the character from the movie, what more can you want? Even the back is vintage ’77 style. Good times. Best of all, minimal packaging. Board, bubble, tray, end of story. Since I’m collecting the Star Wars Vintage Collection carded, I like that it has a small footprint so I can cram a lot of them into one box. 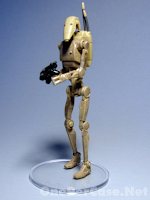 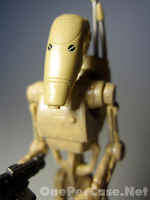 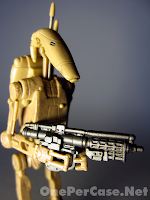 As far as the sculpt goes, I think this is about as accurate as current action figure technology will reasonably get for a Battle Droid. Given the tendency towards a stick-like nature on the limbs, it will be interesting to see how well this guy stands up to gravity over time, but for now, he looks great and stands tall. 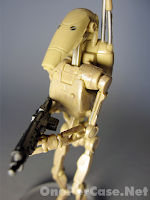 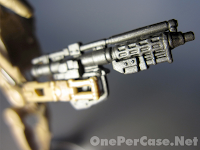 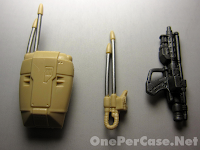 His triumvirate of accessories includes a backpack, antenna and a rifle. The sculpt on all three are solid. The rifle fits reasonably well into his little droid claws, and both the backpack and antenna stick well in the slots on his back. One little problem though, the rifle won’t attach to the backpack. I picked up a few extra of this guy specifically to go with an MTT, so I’m not sure how he’s supposed to be battle ready when he can’t deploy with his rifle attached to his backpack. Believe it or not, it's nice to have a figure that's able to do what you see them do in the movie. The only reason I make such a big deal out of it is that it would have been such an easy thing to do. If a figure from1999 can do it, then there’s no excuse. 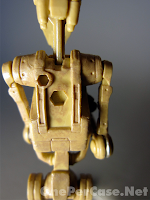 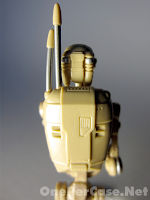 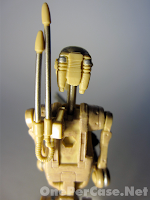 Articulation-wise, the Battle Droid is good. Not great, but good. I try not to be too hard, because reasonably, those previously indicated stick-like limbs can only do so much. One thing he does do well is fold up into a nice MTT-deployable bundle. That, I definitely like. 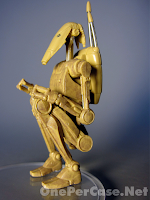 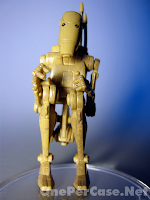 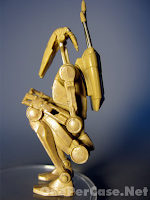 Truthfully, I find this release good, but not great. One of the more-or-less obvious questions is, “If I picked up a bunch of these guys in 2-packs for $7-8, why should I pay $10 or more for one?” I wish I had a good answer for that, but I don’t. Maybe you want a nice little squad of these guys to fill up your MTT? Hey, I just said I don’t have a good answer.

The Star Wars Vintage Collection Battle Droid has been hitting stores for a few weeks now, and is likely to keep shipping for a little while in support of the Phantom Menace 3-D release.  He can be found online at BBTS and other quality online shops. 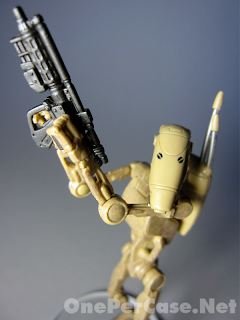