Face it, the Mos Eisley Cantina scene in the original Star Wars is, without a doubt, one of the most memorable scenes in sci-fi history. When your flick is getting parodied in commercials during the Superbowl, you know you’ve made a classic. For years (well, decades really) Star Wars fans have been hounding Hasbro to make more Cantina aliens. We’re at the point where there’s really not a whole lot more to be made (although some could sure use an update). In that spirit, Hasbro delivers Bom Vimdin, in 3 ¾” scale splendor. 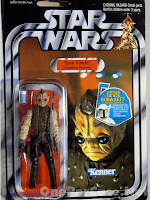 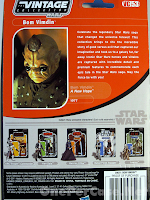 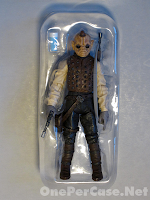 I’m a sucker for nostalgia, so I really just can’t get enough of the vintage packaging. The front looks like something you’d have seen hanging off the pegs at your local Payless or King Norman’s in 1977. The back is pretty sharp too, although I’d be happier if they included a short paragraph about Bom Vimdin himself, as opposed to the generic blurb about “celebrate the legendary blah blah blah”. 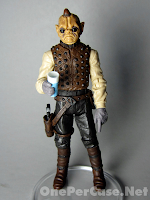 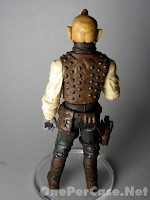 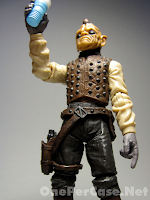 Sculpt-wise, the Star Wars Vintage Collection has really been knocking it out of the park. Granted, the price has gone up, but on a lot of figures, at least we’re seeing some quality sculpts. Really, I can’t find much to complain about here. The head looks like the mask, from the horn right down to the beady black eyes. The costume has tons of detail. The studded vest looks sharp, the holster holds his pistol well, the belt and buckle look legit, and his boots look leathery. Again, there’s just not much to complain about. 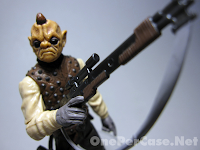 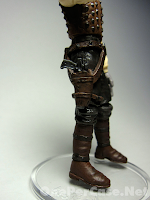 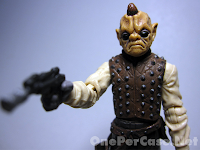 Bom Vimdin, the Advozse smuggler, mercenary, unicorn, and surly alcoholic. Or I dunno, maybe he’s supposed to be a milkaholic. That blue stuff is supposed to be milk, right? Well either way, based on this figure, it seems like Bom’s glass is full of liquid courage. You just don’t point your finger like that as Mos Eisley Cantina denizens unless you’ve had a few. 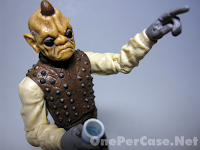 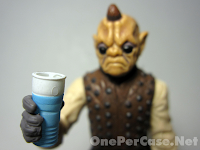 Accessory-wise, it’s a solid release. He comes with his glass o’ liquid, a pistol, and a nice big rifle. Maybe too big. But your gun can never be TOO big, right? The sculpt on all three look great. The paint apps are a nice touch, although a little sloppy on the glass. Most importantly, the pistol fits snuggly into the holster, and Bom Vimdin can actually hold his accessories well. 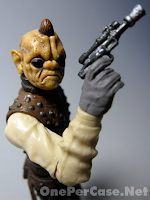 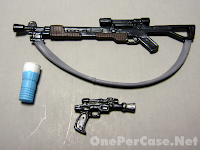 You want articulation? The Star Wars Vintage Collection has generally been delivering articulation in spades, and Mr. Bom Vimdin is no exception. Neck, shoulders, elbows, wrists, waist, hips, knees, ankles, and all fairly well blended into the sculpt using a good combination of ball-joints and swivels. He can hold a decent variety of poses, so overall, well done.

Given that he’s a little small, you might be hesitant to plunk down nine or more dollars for this guy, but it’s money well spent. Unless there are some major strides made in action figures (I’m talking 1977-2007 type strides) this guy is going to be the definitive version for a long time. Fork over the dough and sit this guy down in your Cantina, you won’t be sorry.

Bom Vimdin is still hanging around at brick and mortar stores in my area, and can also be found online at BBTS and other quality online shops. 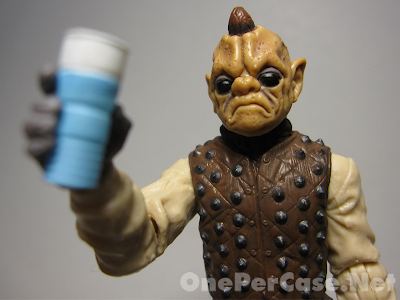