The Cantina scene in the original Star Wars gave us a great look at a bunch of aliens in one scene. People liked it so much that they decided to try it again in Jabba’s Palace for Return of the Jedi. In my opinion, it was successful. It didn’t hurt that we got to see some favorites like Boba Fett in the background, but it was also cool to see some new faces, like Wooof. The third wave of the Star Wars Vintage Collection presented us with a great group of Return of the Jedi figures. Just when I was becoming jaded on themed waves, this ROTJ wave sold me. Then, of course, Hasbro decided to go back to mixed waves just a couple of waves later. Easy come, easy go. 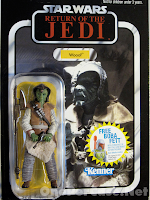 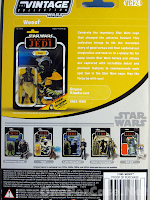 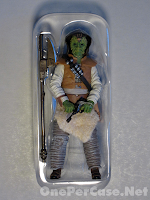 I may not have mentioned it before, but I am a big fan of the Vintage Collection packaging. Other than the offer sticker and some toned down colors (in a good way, no more neon green hands), the front looks just like the 1983 version. All aces, baby! The back gives us a nice look at how the original release looked, free Emperor offer and all. I dig it. Tack on a few pictures of other figures available in the wave (and that mysterious Yoda that never seemed to appear) and I’m pretty much sold. 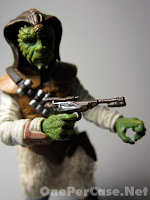 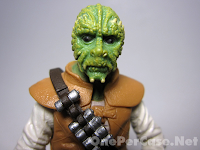 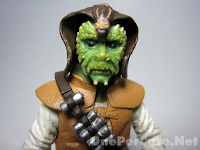 The sculpting on the Star Wars Vintage Collection knocks it out of the park on a regular basis. Not 100% of the time, but overall, this line has been solid to say the least. Top to bottom, this guy looks great. He has a removable helmet that sits just about perfect on his head, where the face looks pretty much spot-on like the costume. The detailing on the hands and fingernails is impressive. The bandolier looks good, the waistband is good, and the holster works well. As a big fan of the vintage figure, I have to love his little fuzzy loincloth. The pants, not sure if these are 100% character accurate, but the sculpt itself looks nice. 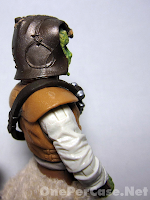 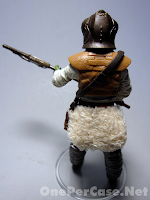 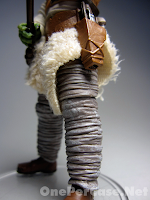 Wooof (the artist formerly known as Klaatu) comes with both a pistol and a vibro axe. Both are sufficiently detailed and come with a little bit of paint to help them look even better. Best of all, they fit in his hands, and the pistol fits in his holster. After years of figures that can’t hold their accessories or put their pistol in the holster, it’s nice to see these sorts of issues being given attention. 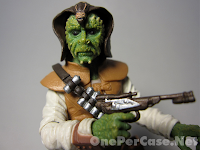 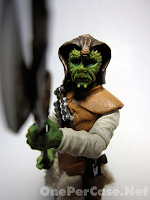 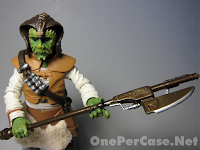 When it comes to articulation, Wooof has the quality range of motion I’ve come to expect from the Star Wars Vintage Collection. Best of all, he’s able to hold poses, and even stands up well, with or without a stand. Bend and rotate the neck, shoulders, elbows, wrists, waist, hips, knees, and ankles, and you can put him into just about any position you’d need him in (i.e. standing near Jabba looking menacing). 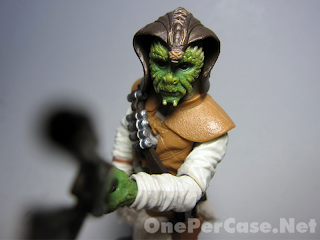 While I’m not a big fan of the new price point on the Star Wars Vintage Collection, I do feel like I’m getting a decent amount of value for the money. The ROTJ wave was even better than I expected, and if you haven’t picked them up, stop waiting. Wooof can  still be found hanging around many brick and mortar stores, and can also be found online at BBTS and other quality online shops. 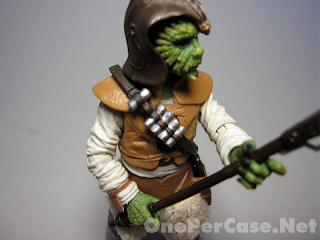