Star Wars Episode I: The Phantom Menace comes out in 3-D tomorrow. Just in time for the release, the Wal-Mart exclusive “Discover theForce” wave is starting to hit brick and mortar with some force, giving us 12 figures from the impending 3-D extravaganza. Out of those dozen figures, the Gran podracer Mawhonic is the lone new character. 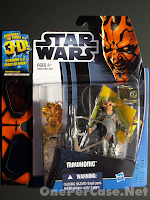 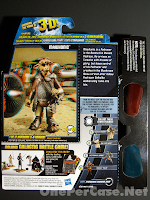 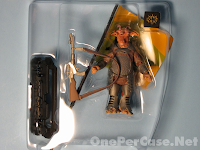 In case you live under a rock (or don’t watch TV), the packaging on the Discover the Force wave has a nice goofy pair of blue and reds to remind you that Star Wars is coming in 3-D. If you don’t want to tear the glasses off, then you have a really odd shaped card, particularly as compared to every other 3 ¾” figure you own. Other than that, the packaging is more or less the same as the other 2012 changes (Movie Heroes and Clone Wars). While the big Darth Maul doesn’t necessarily makes sense on those, it works for Discover the Force, as it’s a Phantom Menace themed wave. The card back gives you a 3-D image of Mawhonic. The 3-D effect works decent, especially if you’re too lazy to just look at your figure. 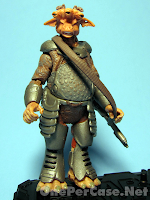 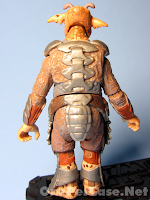 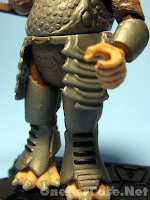 The figure itself isn’t too shabby at all. Just like figures from the Star Wars Vintage Collection, the sculpting here is nice. The head and face look like the character (and could be reused on an updated Ree-Yees, hint hint Hasbro). The armor plating looks good, they got his gut right, and his feet have some good spotting and nails. Overall, well done. 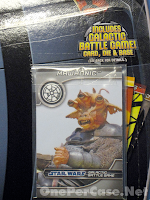 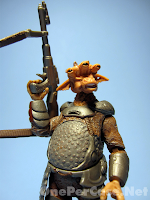 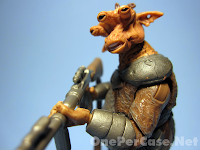 Mawhonic is packed with a galactic battle game card, die and base, just like all the Discover the Force figures. In addition, he’s got his flag for representin’ and a rifle for poppin’ fools. The flag is of decent quality, and he can hold his pole just fine (although he could really use a droid to do it for him). The rifle looks good and functions reasonably well. He can strap it on his back, holds it one-handed well, and can do so-so two-handed. Unfortunately, his gut prevents him from holding it two-handed in any threatening manner. I guess it’s not Hasbro’s fault that Mawhonic likes to eat. 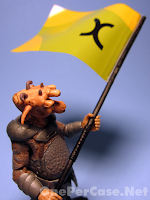 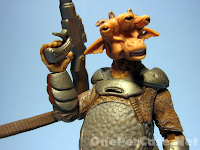 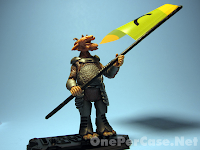 The articulation is more-or-less on par with the Star Wars Vintage Collection figures, which is quite good. He’s got movement in the neck, shoulders, elbows, wrists, waist, hips, knees and ankles. The armor plating hinders the hips a bit, but we don’t have a podracer for him to sit in, so no big deal. His left hand was quick to pop off while I tried to pose him with his rifle, but I can’t speak as to how wide spread of an issue this is, and it pops right back in, for now.

Overall, this was the figure I was most looking forward to in the Discover the Force wave. $9 for a well designed brand new character, I can handle that. With the big push for the Phantom Menace 3-D, these should be showing up at a Wal-Mart near you, if they haven’t already. Plunk down the cash for Mawhonic and round out your podracer collection! 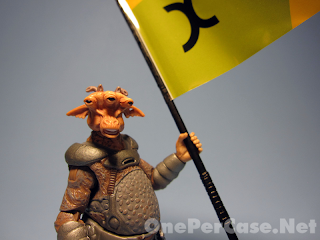