Today shows off our second of the two OTFCC Exclusives, the Shattered Glass version of Drift. Like Over-Run, Shattered Glass Drift is an OTFCC Exclusive; the figure had to be ordered through the club. If you weren't watching for when he went up for sale, you may have missed him. Over-Run sold out in a day, SG Drift sold out in 2. The down-side, since he is a club Exclusive, SG Drift is a repaint. The up-side, he's a damn good repaint.
I have to admit, I like Drift. Yes, he's the cliched, over-used archetype of the evil-doer that has seen the light, but I like him. The whole idea behind Drift is that as a Decepticon, taking the name Deadlock, he committed uncounted atrocities in order to climb up in the Decepticon ranks. After he disobeyed orders one too many times, Deadlock was almost executed by his own commander, Turmoil. Deadlock escaped his execution and wound up on a planet that was home to a lost faction of unaligned Transformers. After an extended stay with them, Deadlock had come to see that the war that had consumed his race had made them worse than monsters. His eyes opened, he rebuilt himself in the image of the unaligned and took back his original name, Drift. He gave up his guns, exchanging them for the more elegant swords that he had masterfully learned to wield, and set out to make a difference. He wound up coming across the newest incarnation of the Wreckers and eventually joined the Autobot ranks. Drift is basically is the stereotypical single bad-ass character type. He doesn't really live up to it according to the fandom, but I enjoy him.

Like all the club Exclusives, SG Drift comes in a beautifully illustrated, convention-style box. The sides of the box are adorned with shots of SG Drift in Alt-mode, logos, and copyright info. 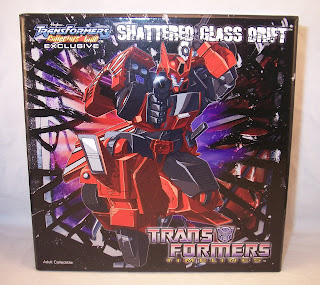 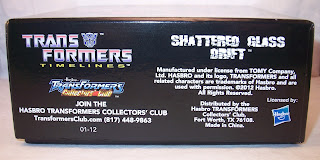 The OTFCC really knows how to keep a figure safe. Open the box and you will see that your SG Drift is lovingly set in a foam insert, cut specifically for SG Drift and his pistols. Or... you could put regular Drift in there... or Blur... your choice. But I'd think SG Drift would be really pissed at that. 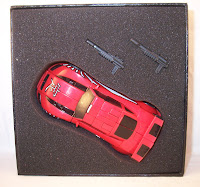 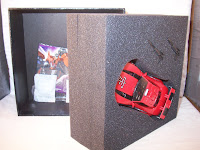 The Tech-Spec's that the OTFCC use for their figures are something I wish Hasbro would adopt. They're not just stamped into the package, they are their own little card. They have the character's stats, a description of their personality and function, a motto, and some really great artwork. 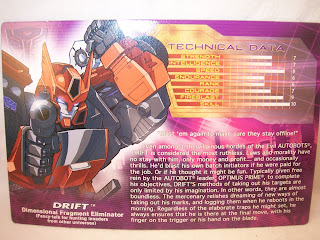 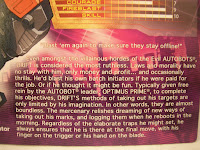 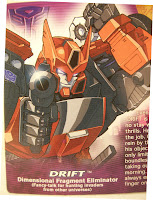 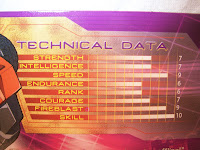 As an exclusive, SG Drift is not a new mold, merely a repaint. Since it is a version of an already existing figure, there isn't any retooling. Standard Drift was done in white and red and with SG Drift being his polar opposite, the coloring is somewhat opposite as well. Since he's basically Deadpool, he's colored primarily red with black and some white decco. The Alt-mode and major Bot-mode parts are molded in red with the centralized Bot-mode parts molded in black. The paint apps are crisp; the striping on the sides is straight and the Kanji is well placed; the split down it's center is well aligned. I can only find two small spots that are questionable. 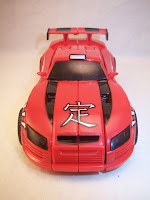 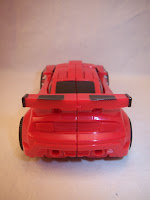 Even though it's the same mold, the color difference really does wonders... even with the second decco of this figure, Blur.

SG Drifts gives us a nice red and black bot. What I find really nice are his accessories. He not only comes with the original Drift's short-swords and great-sword, but he comes with Blur's blaster pistols as well. SG Drift is armed to the teeth! Anyone see what I see? There are paint apps on SG Drift's short-swords! Is it me, or do they resemble a certain famous ninja-commando's clan markings? 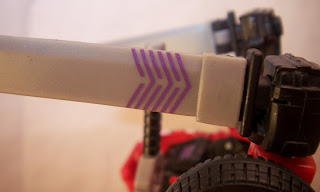 SG Drift is massively articulated. He does have some bulk in his lower legs that inhibit some of it, but he more than makes up for it in his arms. He's capable of pulling off a myriad of poses.

*some poses may require hand support... or a Mattel flying stand... or a wall... or sheer willpower. 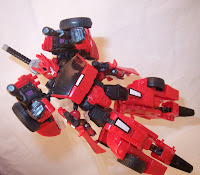 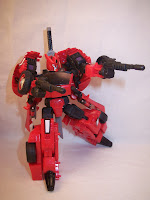 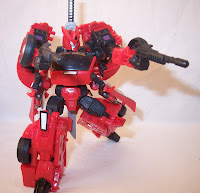 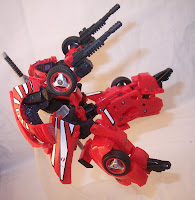 Whoa now... Whoa... now. This is SG Drift. He's a repaint of a re-tool. He has Blur's pistols! Where do the pistols go when I have the short-swords out? Can't I put them in the 'scabbards'? Sadly, no. This really is a repaint of the original Drift mold. When Blur was made, the door scabbards were re-tools of the original ones allowing for a little more space for the width of the pistols. Unfortunately, SG Drift has nowhere to stow  his pistols while he's choppin' up Decepticon Bea Arthur haters.

SG Drift also comes with the great-sword that was a a major plot point on Standard Drift. The molds articulation works really well allowing SG Drift to hold it with both hands. 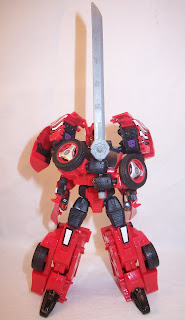 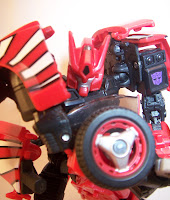 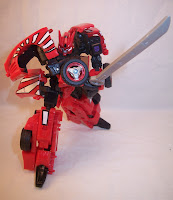 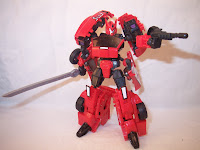 Like the idea of Shattered Glass, with the roles being reversed, the faction symbols are also reversed. SG Drift still maintains his Autobot symbol, but in Decepticon purple. Just another of the really cool little things that really endear the Shattered Glass Timeline to me. 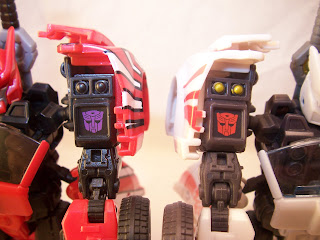 I really love this figure. The mold is solid. The color choices are fantastic. The accessories are excellent. It also helps that I not only like the character of Drift, but of the concept of Shattered Glass and the Drift that comes from it. It's kind of ironic, I'm not a  fan of Deadpool (I hate you Rob Liefeld) but I love the concept of a Deadpool-ish Drift. It must be just the whole Transformers thing thrown in the mix. Making it Transformers just makes the idea 100x better.

If you can get a hold of this figure, I'd really recommend. Even if you don't care for Drift much, you still need and SG Drift to complete your Shattered Glass collection. 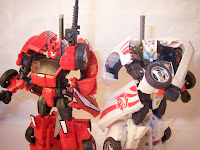 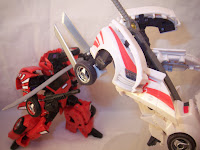 Review and pics by Scion of Primus for OnePerCase.net