So the new Marvel Legends are starting to show up (see Jason’s reviews so far here, here, and here), but for us 3 3/4” collectors, we’re in kind of a slow period right now.  Some folks are still trying to track down Wave 17 and the latest comic packs, but without even so much as a pre-order for Wave 18 on the horizon, and with Avengers movie line figures still about three weeks out (though the 2/27 street date apparently didn’t stop a few So Cal Toys R Us stores from putting them out), there really isn’t any NEW product to hunt for and review in the 3.75” world at the moment.

So what am I going to do about that?  Play with some giant f@#&ing robots, that’s what.

Full disclosure:  I f@#&ing love giant f@#&ing robots, and the Sentinels from the Marvel Universe have long been a favorite of mine.

Back in the Top Ten Releases of 2011 article, I gave this guy an honorable mention for being badass.  So now with nothing really new to review this week, we’re going to take a closer look at 2011’s biggest Marvel Universe figure.
This figure was first made available at San Diego Comic Con last year, at the Hasbro Toyshop booth.  The figure featured its “classic” purple and maroon coloring, and came on an awesome over-sized blister card, inside a big suitcase-type box featuring some awesome art by Joe Quesada.  It didn’t include a pack-in figure.  No longer being a MOC collector, I resisted the urge for a while, but eventually tore that sucker open so he could rain down terror and destruction upon the mutants on my shelf. 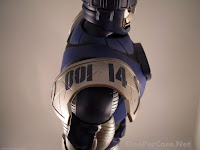 The retail version of this figure came in a (relatively) smaller box, without the awesome giant card-back, but with a Wolverine pack-in figure (the same as the one included in the Giant Sized X-Men box set, itself being an “X-Men Origins: Wolverine” figure with a new head).  Unfortunately, that release suffered from made-up-color-scheme-itis.  It doesn’t look bad, but it doesn’t look as cool as the classic deco, and to my knowledge, this design has never actually shown up anywhere in the Marvel comics/cartoons/movies universe. 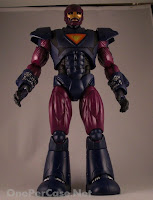 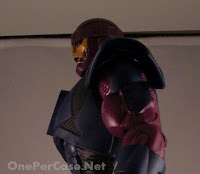 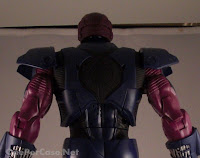 The final release was the “classic” deco version in the retail box, still with the same Wolverine figure pack-in.  Unfortunately, this version has so far only been available through online retailers, just like last year’s Galactus variant.  No actual retail sightings have occurred.

The packaging on the retail version is similar to last year's Galactus, with a flip-up flap revealing the figure and pack-in through a window.  The packaging also heavily promotes the GSXM 35th Anniversary box set by featuring all of those characters in the art work.  Unfortunately, there is no way to distinguish between the purple/silver and purple/maroon versions without lifting the flap to check.  But since the classic colors haven't shown up at retail yet, and likely won't, this isn't a big deal.

The figure itself is roughly 16 inches tall, and features light up eyes and more audio phrases than I care to count.  They're all something along the lines of "halt mutant!" and "ouch! my power core is detonating!", but there are enough of them that I don't have them all memorized and don't know what he's going to say next.  I'm pretty sure he once said "My name is Optimus Prime".  Errr... wait... wrong giant f@#&ing robots.

Articulation wise, you've got a lot to work with here, with a ball neck, wrists and ankles, ball-hinged shoulders and hips, double-hinged elbows and knees, and swivels at the bicep, forearm, waist, thigh and calf.  That's better than a lot of 3 3/4" figures. 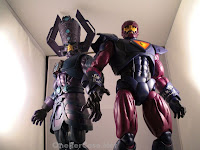 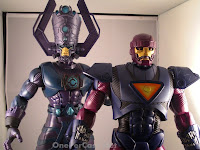 One thing you may not initially realize is that this figure actually uses a lot of the same parts as the previous Masterworks figure, Galactus.  The torso, upper legs, upper arms, and hands are the same, with new forearms, lower legs, head, and chest-covering.  I actually don't mind this parts-sharing, because it's not obvious and there's enough difference between the two that I didn't even initially notice.  Despite sharing the core of their bodies, Galactus still stands three inches taller than the Sentinel, thanks to his giant freakin head.  Never the less, the Sentinel is huge, imposing, and all kinds of awesome next to the 3 3/4" figures.

The Wolverine pack-in is the only real disappointment of this set, only because it's not unique in any way from the box set version, and is not different between the silver and maroon Sentinels, unlike Galactus last year, who came with a differently deco'd Silver Surfer, depending on which version of big-G you got.  So if you're army building Sentinels, you're army building Wolverines, too.  I wish that just once, Hasbro would include someone that's not a main character as a pack-in.  In this case, some sort of army builder would've been cool, like an MRD agent, or a Purifier, or something other than the 83rd Wolverine release.  Or if it has to be Wolverine, at least give us a new version of him.  A "Days of Future Past" version would've been perfect here. 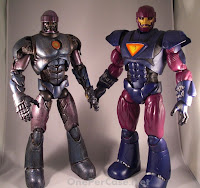 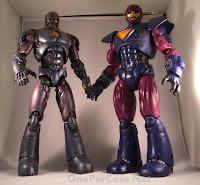 Compared to the Marvel Legends Build-a-Figure Sentinel from the Toy Biz days, this guy holds his own.  I really can't decide which Sentinel I like better.  So I just have a small army of each.  The Masterworks is a hair taller than the BAF, and features the lights & sounds gimmick (which I like in this case), but the BAF is still a BMF, with superior sculpting and detail, poseable hand tentacles, and a grittier paint job (I think of it as a "Days of Future Past", Sentinels-take-over-the-world version).  Articulation is different, but pretty on par between the two (the BAF has individually articulated fingers, but lacks several other POA that the Hasbro version has).  Seriously, this is a toss up, and I can't recommend one over the other.  They're both badass.

So if you haven't picked up one or all three versions of this guy already, do.  The SDCC version can be found on the secondary market for anywhere between it's original price ($60) and double that.  The retail silver version has been reported in some Walmarts on clearance lately for varying prices below retail (though I haven't personally seen it), and the maroon variant, as mentioned, is available online in the $60 price range.  You can pick up both "retail" versions at BBTS for $39 and $59.99 respectively. 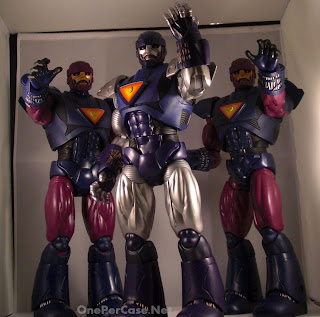 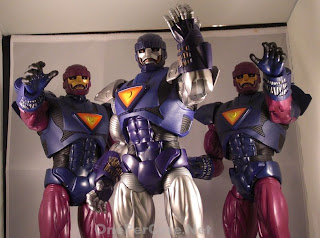 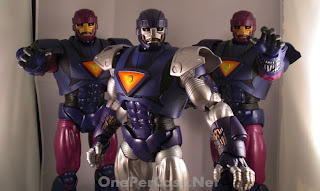 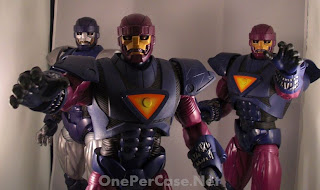 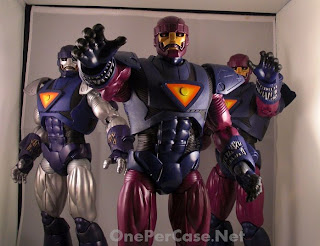 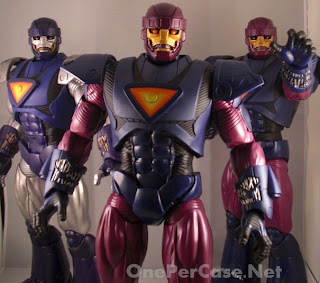