Let's go back 13 years. Bill Clinton is President, Armageddon is showing Bruce Willis' softer, yet gruff side and the world is being silently invaded by parasitic worms called Yeerks. Well, maybe that last part didn't actually happen, but in K. A. Applegate's series The Animorphs it did. 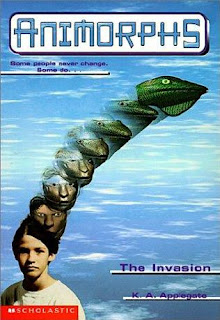 The 54 book main series with 10 companion books tells the tale of five teenagers who were given the ability to morph into any living creature they could touch. Being able to morph has only one drawback, if they're in a morph for more than two hours, they are stuck in that morph permanently. This ability is the technology of an advanced alien race called the Andalites, a race that looks like a weird combination of deer, human and scorpion. The Andalite, Elfangor, gave these teens the ability for one reason, to fight of a silent invasion of a second alien race, the Yeerks. Not too long after the series started, the teens are joined by Elfangor's little brother, Aximili, called Ax for short.

Yeerks are parasitic worms that crawl into your head and flatten themselves to cover your brain and take complete and utter control over your body. You can't so much as blink your eye, everything you do is done by the yeerk. Creatures that are infested by a yeerk are called controllers. The Earth invasion is led by the only Andalite-Controller in existence, Visser Three. Visser Three thinks that this group of kids, who call themselves the Animorphs, are actually a small group of Andalites.

The series is all about how this group of six does their best to fight off the yeerk invasion without giving away their secret that they are actually human. Along the way they fight other enemies and find new allies.

None of the books are particularly long, most of them are around 100 pages of large type print, and even at slower speeds, can be read in an afternoon. What's more interesting is the way that Applegate and her various ghostwriters weave together such amazing character development and still tell a story that is fairly simple by many standards. The best comparison I can make is that these are extended comics but without the art.

The books are being relaunched with new covers, with the first five books out already and the next one due out in March. Amazon is also releasing the books for the Kindle at the same time, but there are no other official e-book versions. This series is definitely worth picking up for anyone who is into sci-fi literature and wants something a little different than other alien invasion stories.
Posted by ElfangorTheAndalite at 11:05 AM