Hasbro, in their ever-frustrating “communicating without actually communicating anything” manner, hasn’t exactly been clear on a lot of the plans for The Avengers line, and the release date has been especially vague.  The press release from a couple months ago listed 2/27 as the street date for these, while Hasbro’s brief PR events since then have mentioned an “early March” release.  Toys R Us’s computers list 2/5 as the street date, despite the boxes that have already shown up in some stores being stamped with the 2/27 date.  Thanks to all of this confusion, some TRU stores are already stocking Avengers merchandise on their shelves.  Just none of the stores in my area yet.  But thanks to our buddy “PeteParker”, famed for his awesomeness  on various Marvel forums, we’ve got a mostly complete set of Wave 1 Wave 2 to dissect in our laboratory over the next several days.  We'll start this series off with the First Avenger, Captain America.

Much like some previous Marvel movie lines, The Avengers line is split into three series: Comic, Concept, and Movie.  Judging by the pre-order listings on BBTS and HTS, Waves 1 & 2 will be launching at the same time.  “Wave 1” consists of several Comic and Concept series figures, with the first round of Movie series figures appearing in “Wave 2”.  Only the geeks like me that pay attention to case listings will realize that, so for all intents and purposes, this is basically Wave 1.


Here’s a shock that nobody saw coming:  Of those first two waves, totaling 11 unique figures, only two of them are NOT a version of Iron Man, Thor, or Captain America.  Also a shocker:  The Iron Man, Thor and Cap figures are all packed two or three to a case, with what will arguably be the most sought after figure of these waves, Loki, being packed one per case (ahhh, name of the website!) in Wave 2.  So count on seeing these first couple waves choking pegs until sometime next year.  And if you’re looking forward to the figures of Hawkeye and Black Widow, which won’t arrive until at least Wave 3, keep an eye out to pre-order online.  This whole situation reeks of the now classic “never see anything beyond Wave 2 at retail because the case assortments suck” scenario we’ve all become accustom to.


Disclaimer:  I will state here, loud and clear, that despite the sarcasm and pessimism I may exhibit toward certain aspects of this line, as a whole, I have been looking forward to this line for quite some time, and jumped through a few hoops to get these figures as early as I could.  I’m a big fan of what Marvel Studios is doing with their movies, and I’ve been an equally big fan of Hasbro’s movie lines thus far.  While I may not agree with certain things Hasbro has done with this line (less articulation, raised cost, questionable case assortments), at this point, I’m still excited enough for these things that I’m buying them.  So, over the next few days, we'll take a look at what will soon be choking the life out of retail shelves for the next year. 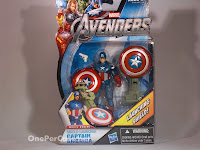 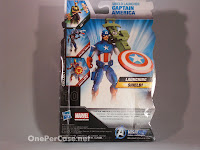 The card-backs are pretty standard for what you would expect in this line.  Like the previous movie lines, there is no character-specific artwork, just a generic Avengers logo and a picture of the “Big Four” in the corner.  Nothing remarkable, but, the design is fitting, and easily distinguishable enough from anything else on the shelves.   Not bad, but nothing that’s going to make me a carded collector again.

The figures themselves…
Right off the bat, a lot of collectors are going to be disappointed by certain aspects of this line, especially the unexplained lack of some common articulation in most of the figures, basic stuff that has been standard in 3.75” figures for years now, like wrists, ankles, and waist joints.  In fact, a lot of collectors posting on forums I read have flat out claimed they won’t be collecting this line for that very reason.  I’ll admit, I don’t blame them.  The sudden setback is kind of a slap in the face to collectors.  But there might still be some stuff worth liking here… 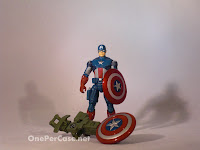 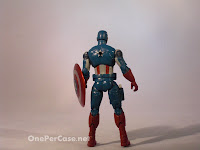 Ol’ Stars and Stripes here gets a face-lift from his first movie costume, into something a little more modern.  Based on what we’ve seen of the movie so far, this figure appears to be accurate to his on-screen counterpart. 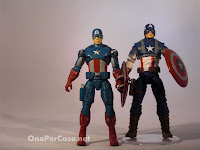 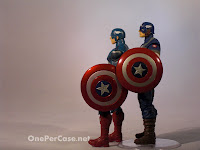 The Good:  The sculpting on this guy is top notch.  The plastic feels much sturdier than most recent Marvel figures.  Unlike the figures from the Cap movie line that felt like they were made of rubber, this guy doesn’t feel like he’s going to warp and fall over on my shelf after time. 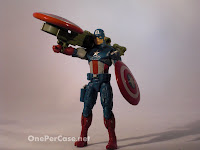 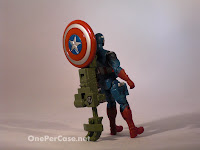 Accessory wise, this guy comes with both his kid-friendly shield launcher, that we collectors will toss aside, and his movie-accurate shield.  Despite being almost identical, this shield is actually a different sculpt than the one that came with "Super Combat Cap".  He also includes his handgun, which fits nicely in it's holster, and I believe is the same sculpt from the previous movie figure.

I don’t mind the obnoxious spring loaded crap as long as we still get the realistic accessories, too.  This is something the First Avenger movie line failed at miserably.  Good course correction here, Hasbro. 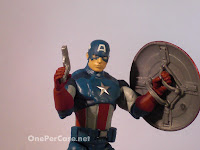 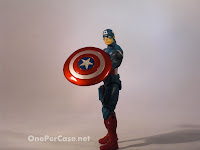 The Bad:  The paint, while generally being better than a lot of previous movie lines, still has a few minor blemishes.  Check out Cap's face.  Hasbro seems to have stepped QC up a notch, but not perfect yet.  This may just be my sample, but definitely something to watch out for. 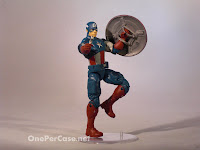 The Ugly:  Articulation on this guy is definitely not what it could be.  There is absolutely no wrist, ankle, or waist/torso articulation, despite the sculpt of the torso looking like it was designed to accommodate a mid-torso joint.  We do have a ball joint neck, ball hinged shoulders, elbows, hips, and double hinged knees.  With figures in other lines like Marvel Universe and GI Joe stepping UP the level of articulation (seriously, rocker ankles… why are these not standard on every figure from now on?), I’m completely dumbfounded at the lack of articulation here.  Especially for such a dynamic character as Captain America.  I really hope there is a more collector-friendly, fully articulated version planned for later in the year.  You can keep the lousy spring loaded accessory junk, Hasbro.  Spend that money to give me the articulation.

So there you go, the first Captain America figure of what will undoubtedly be many in the Avengers line.  I have little doubt that any of these figures will be hard to find at retail in a few weeks, except maybe Loki, who I haven’t gotten my hands on yet, but if you want to play it safe, Big Bad Toy Store has both of these waves up for pre-order now, and with the price per figure now up to $9.99 at TRU, it’s no longer cheaper to buy at retail. 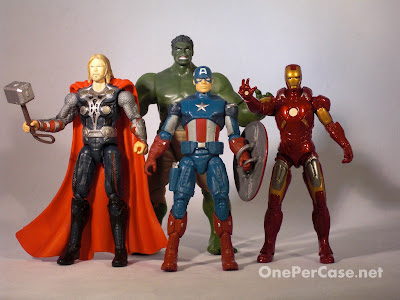 Check back later this afternoon for the next figure in the series, Iron Man Fusion Armor Mark VII.

-Review and photos by Zak X, from the future.  We have sandwiches there.