I don’t know what a “Reactron” is.  I doubt Hasbro does either.  And I’m fairly certain that this armor does not make an appearance in the movie.  But as far as stealth repaints go, this guy could be worse.  It’s a straight up repaint of the last figure I reviewed, Heavy Artillery Iron Man, but with a new name and number.  Not sure why it wasn’t just released as a variant or running change to the Heavy Artillery figure.  I was actually really hoping for a 3.75” version of the Stealth Mark IV released in the 6” line, but this guy will do for now. 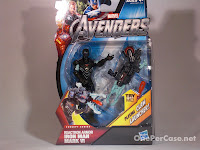 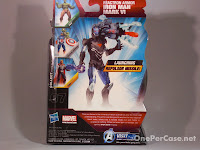 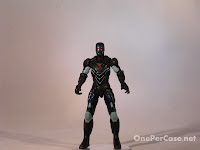 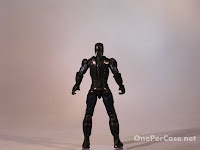 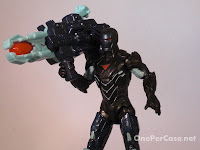 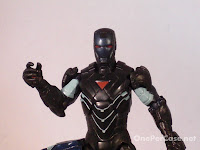 Not much to say that wasn't said when I reviewed the red and gold version of this sculpt.  Only the paint is different.  Even the accessory is the same. 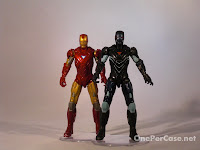 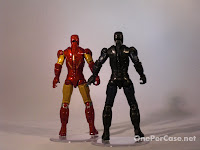 The Good:  The paint is sharp. 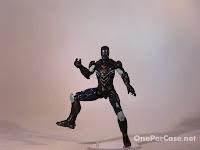 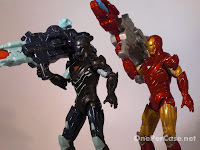 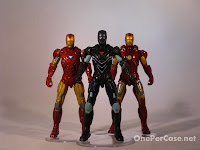 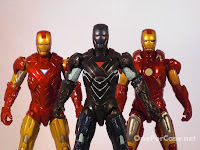 The Ugly:  Did we really need THREE different Iron Man figures in the first wave?  Seriously, Hasbro.  I can go into any Target, Walmart or Toys R Us right now and buy just about any of the movie armors that were released almost two years ago in the Iron Man 2 line, with more articulation, a stand, and at a buck or two cheaper.  Releasing THREE MORE right off the bat in this line is beyond overkill.  It’s flat out stupid.  And while the Iron Man 2 line proved that Hasbro’s “kids only want main characters, and they want 83 versions of them” argument was total BS, this move proves that Hasbro lacks the ability to learn from their past mistakes.  We will see these Iron Man figures lingering for months, at least.  Would it have been so hard to release these one per wave, and maybe get Widow or Hawkeye out there in the first two waves?  They’re the characters without movie-verse figures yet, and they're the ones that collectors are most looking forward to.  They should be a priority to get out.

So there you go, most of Wave 2 of The Avengers, which will apparently be hitting retail right alongside Wave 1 in the next week or two.  We’ll have much more to cover in the upcoming weeks, with several awesome vehicles being released, the awesome exo-armor suits, and of course, more figures with less than awesome articulation.

I have little doubt that any of these figures will be hard to find at retail in a few weeks, except maybe Loki (and thanks to Joe for snagging me a Loki the other day, review coming soon), but if you want to play it safe, Big Bad Toy Store has both of these waves up for pre-order now, and with the price per figure now up to $9.99 at TRU, it’s no longer cheaper to buy at retail.