Depending on where you live, you may or may not be finding Hasbro's The Avengers 3.75" movie line at your local Toys R Us stores.  Thanks to the magic of the internets, and cool people on said internets, we now present to you the Iron Man Mk. VII armor, as seen in the newest trailer for the movie, complete with giant repulsor buzz saw blade spinning super alien killing action!

The ending of Iron Man 2 made a fairly big deal of Tony Stark’s Arc Reactor changing from the classic circular design to the modern triangular design in the Mark VI armor.  Now the Mark VII is back to the round design.  Maybe this will be explained in the movie.  Maybe it won’t.  Whatever, I personally like the circular design better. 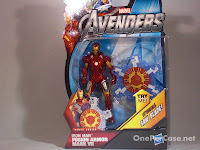 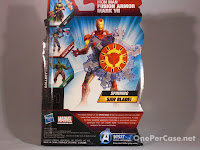 Pretty standard, looks like the rest of the Avengers line, only it has the Mark VII pictured on the back.  Not bad, but nothing remarkable. 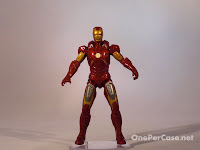 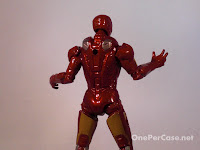 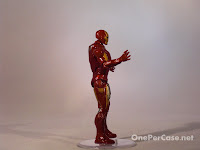 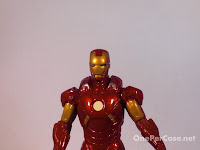 The Good:  Sculpting is pretty decent, and from what we’ve seen in the trailer, it looks pretty accurate to the movie.  A few of the angles and contours of the armor are more rounded than I expected.  I'm not sure if this is sloppy sculpting, or if the armor in the movie will actually be this smooth.  When I first saw this armor design, I wasn’t a big fan.  But it’s grown on me, and now I kinda like it.  From the movie trailers, I get the idea that it’s meant to be a more “heavy duty” type of armor, with thrusters on the back of the suit, not just the feet and hands, and what appear to be missile pods concealed in the shoulders, similar to War Machine in Iron Man 2.  Maybe the “secret enemy army” in this movie is enough that Tony has to whip out the big guns. 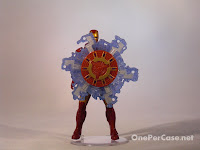 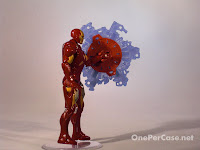 Also, the giant, not-at-all-movie-accurate accessory, in this case a “spinning saw blade”, despite making no sense for Iron Man, actually looks pretty cool.  Just not on the figure.  Also also, like with Cap earlier, this guy feels less like gumby, and more like a suit of impervious armor. Hasbro seems to be using a harder plastic for these figures.

Finally, the paint is generally better looking than previous movie figures, and there were no significant blemishes in my figure.  The colors used on this figure look great, nice and metallic. 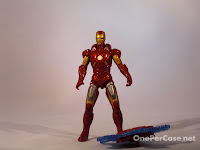 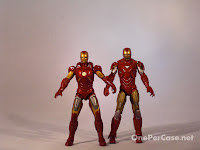 The Bad:  The figures are shrinking!  Seriously, this guy is a good couple millimeters shorter than the Iron Man 2 line figures.  Not a huge problem, but he definitely looks a little scrawny next to the previous Mk. VI armor. 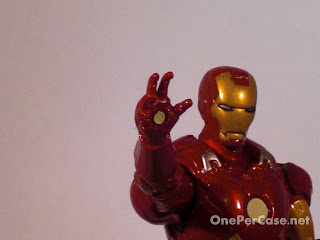 Despite the paint generally being better on this figure, one thing bugged me.  The RT on the chest and the palms of the hands are just white dots.  Unlike previous movie Iron Man figures (and even other ones in this line that we'll get to later), there is no subtle blue fading at the edges of the RT to give it a "glowing light" appearance.  This just looks like a stamped on white dot.  Doesn't look glowy at all.  Strange. 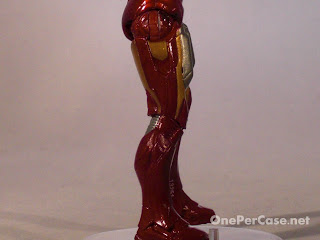 The Ugly:  Again, articulation.  It blows.  No wrist, no ankle, no torso.  Just the same ball joint neck and ball hinged shoulders, elbows, hips and knees as Cap up above.  Oh that's right, I said ball joint knees.  You know, as in, not a double-hinged knee joint.  So there's one LESS point of articulation.  I think the thing that drives me nuts about this the most on this figure is the fact that it’s a completely different articulation scheme than the Mark I through VI armors from the Iron Man 2 line.  This guy looks kind of odd next to them.  Again, I hope for a more articulated version later down the line.  The one small plus side to the ball hinged knee, is it looks more realistic when standing straight-legged.  But it still doesn't match the previous figures.  Not cool, Hasbro. 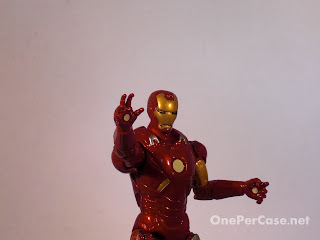 Also, the hands are posed in a goofy, almost cool looking "I'm blasting you!" pose.  Since there's no wrist articulation though, this makes it impossible to get a neutral pose, and really, they just don't look that great.  Plus the fingers on mine were a little warped. 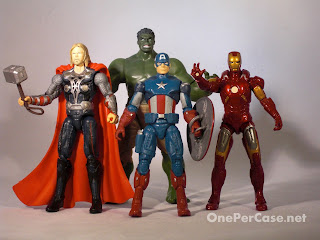 Overall, despite some setbacks, I enjoy this figure, but just barely.  I think it will look good in my movie hall of armor display (using the Target exclusive light up bases from 2010).  Just not great looking in a dynamic "action pose" display.  I'm not counting on it, but I really hope for a more articulated version down the line.

If you're worried about not finding this guy at retail (don't be), or want to save yourself some hassle and pick them up by the case, Big Bad Toy Store has pre-orders live for prices about equal to retail ($9.99 per figure at TRU for these things... really...)

Tune in tomorrow for a look at Shock Strike Thor!


-Review and photos by Zak X from the future's sandwich.
Posted by Zak Sousa at 12:38 PM