Gamma Smash Hulk:
The tradition of hiring a new actor to Hulk out for each movie lives on, and once again, his design has changed.  I won’t even start to rant about the reasons why I hate the Ang Lee Hulk, but I will say that I really liked Marvel Studio’s reboot, and I really liked Ed Norton as Banner, and I thought the CGI Hulk in that movie was pretty good.  The figures based on that Hulk were also pretty good.  This one, eh, not so much… 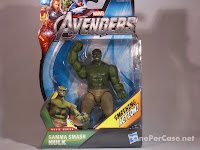 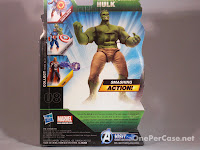 Looks like the rest of the card-backs, but with a slightly over-sized bubble.  This card-back design is actually growing on me. 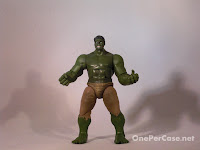 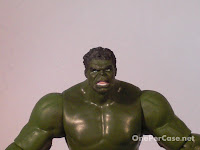 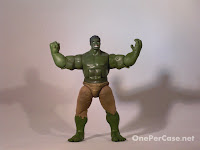 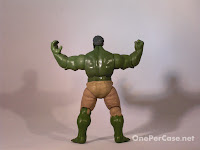 The Good:  The face sculpt rocks, and looks (I think) pretty damn close to what we’ll see on screen with Mark Ruffalo.  Also, not like it’s hard to get the paint right for a Hulk figure, but the paint job on this guy is pretty good.  He’s green where he needs to be green.  He’s not green where he needs to be not green.  There's just a little bit of darker shading in areas.

The Ugly:  Really, those Khakis are really ugly.  I understand that purple pants aren’t very realistic, but the last movie at least had the good sense to make his pants blue, or black, or grey, or some color other than Khaki.  It looks like Banner hulked out while he was on a safari.  Also, is it just me, or does this Hulk look a little flabby around the mid section?  A little less buff than the previous CGI version.  Like he’s been hulking out in the Hostess aisle at the quickie mart on the Helicarrier a little too much.  Hulk sad.

The Really Ugly:  This figure contains something I hoped to never in my life see in another action figure:  The dreaded built-in “action feature”.  Lift one of his arms, and both of them slam down in a “Gamma Smash” attack.  Ugh.  I guess if there were one figure that had to have an action feature, “Hulk Smash” makes the most sense, but I’d rather it not be there, hindering articulation and poseability.  Speaking of articulation, it sucks.  No wrists.  No ankles.  There is an ab-crunch, but it’s obviously to accommodate the action feature and doesn’t look very good.  The shoulders have a ratcheting mechanism in them.  Poseability on this guy is probably the worst so far.  And to top it all off, he’s not much taller than the other figures in the line.  I prefer my Hulk to tower over the rest of the team a little.  Not ridiculously tall, but in the 8-foot scale range would be nice.  I think I’ll be sticking with an Ed Norton Hulk for my display shelf.  This Hulk stay on peg. 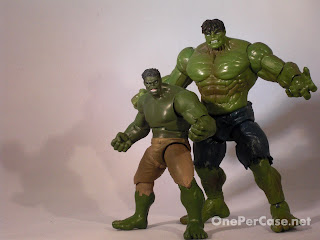 In short, for as much as Hasbro hyped this particular figure up in recent media events, it's very underwhelming.  This guy shouldn't be difficult to find at all once this line floods mass retail in a few weeks, but if you want to claim yours early, pay our friends at BBTS a visit.

-Review and photos by the magnanimous Zak X
Posted by Zak Sousa at 3:30 PM