This is one of the more anticipated figures of the line, and the only “comic series” figure in this case assortment, based on Thor’s “Ultimate universe” appearance.  I was never a huge fan of the Ultimates universe, but wasn't Thor a total tree hugging hippy? 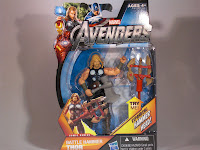 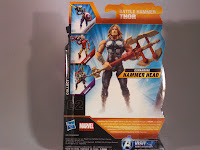 Same card-back.  For some reason, I think it looks better with the comic series figures. 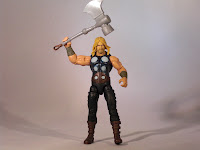 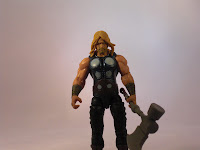 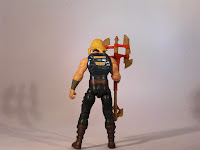 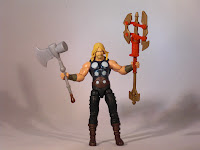 I really like when Hasbro does a comic series as part of their movie lines.  Depending on the line, it's either a great way for us to get a few figures we'd probably otherwise not get any time soon in the Marvel Universe line (Iron Man 2, Wolverine), or a whole metric f@#$ ton of stupid made up repaints of the main character (Captain America).  Or in the case of Thor here, you just don't get a comic line.

Well Hasbro takes a small step in correcting that oversight with this figure, who, along with IM2's Ultimate Iron Man and CA:TFA's Ultimate Cap, brings collectors one small step closer to having a completed Ultimates team. The upcoming Ultimate Hawkeye will help round that out, and the movie Nick Fury figure also fits in nicely here. 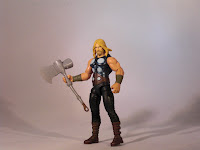 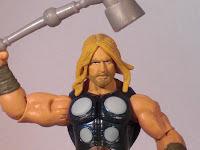 The Good:  Awesome sculpt.  This guy looks perfect.  Great likeness to the comic book design.  Sculpting rocks.  Paint detail is great.  And he comes with TWO different hammers of awesomeness.  Did I mention the sculpt rocks?  Look at those big beefy arms.  I want to buy a dozen of this figure and chop them up to use those arms as custom fodder for a bunch of other big beefy characters.

Back to the Hammers of Awesomeness.  I recognize Mjolnir, but I'm not sure what the other one is supposed to be.  Regardless, it looks really cool, and the "expanding" gimmick is actually pretty awesome on it.  Of all the ridiculous accessories in this line so far, this is the least ridiculous.  I like it.  Mjolnir looks great too, just like it does in the comics.  My only minor gripe here is the lack of paint on it.  It's just plain grey plastic, aside from a dab of brown paint on the strap at the pommel.  Would've been nice to see it detailed out like other versions of Mjolnir. 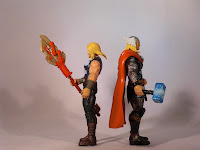 The Bad:  He’s just a little shorter than I would prefer.  It seems overall that figures in this line are shrinking compared to other 3.75” Hasbro lines.  I would’ve liked to see this guy tower slightly higher over other characters.  He’s about the height, maybe a hair shorter, of Movie Thor from this line (who, to be fair, was actually taller than previous movie versions of Thor).  I'd rather see him be the height of Thor Reborn from the Universe line. 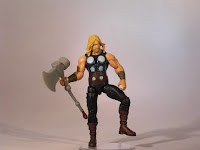 The Ugly:  Same articulation problems as the others thus far in this line, complete lack of wrists, ankles, and torso.  I’m getting really sick of typing this. He has the requisite ball hinges everywhere else, including the knee, like Iron Man Mk VII and Hulk, but unlike Cap and movie Thor. Who ever it was that dictated the articulation scheme for this line must have really bad ADD.

I really hope that Hasbro has some more comic series figures up it's sleeve for this line, other than just this guy and the Hawkeye we've seen.  I'd really like to see 3.75" versions of the Lord of Asgard Thor and Loki Legends figures that came out during the Thor line (exclusive to Walmart).  I could name a hundred other comic figures I want, too, but those two are at the top of my wish list for this line right now.

Final verdict?  This guy is a toss up.  He's got the fact that he's a comic series figure going for him, plus the sculpt, paint, and accessories kick ass, BUT, he's too short, under-articulated, and he represents a very niche segment of the Marvel Universe.  I'll be honest, I don't know a whole lot of people that read the Ultimate universe stuff.

With this guy being in both the Wave 1 and 2 case assortments, it's very unlikely he'll be hard to come by at retail in a couple of weeks, but just in case, BBTS is the spot to get your pre-order on like Donkey Kong.

Next up:  Heavy Artillery Iron Man.