It's Joe, and once again it's Prime-Time!

It's finally here! Thanks to Jason, I was finally able to grab the new Transformers: Prime Voyager scale Optimus Prime! I've been waiting a while now for this to hit the shelves. Unfortunately, the deluxe version has yet to hit the shelves around here. I was able to nab one of the SDCC versions, but one of the actual figures from the line would be nice to have. But, for now, Voyager scale goodness. Let's check it out... 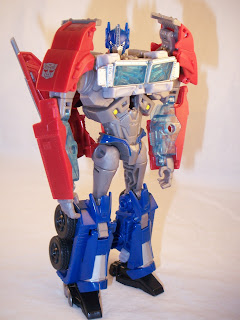 I have to be honest. As of yet, I'm still not to keen on the actual "Prime" show. While I like some of the new character designs, the show itself is leaving me feeling rather meh. The human interaction, especially the kids, Bumblebee not "talking" and the whole story of Unicron actually being at the center of Earth... just not into it. By the end of the first season, I was liking it more. I was getting more of what I like in Transformers Autobots battling the Decepticons, not the Transformers meddling around with humans. Despite my overall meh towards the program, I cant argue with toys, especially new Optimus Primes. 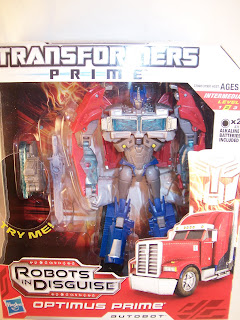 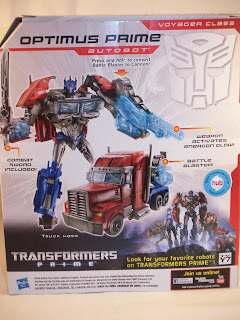 Like all Voyager scale figs, Optimus gets upgraded from a card to a window box. The window gives us a good view of Optimus and his accessories. The back of the box gives us some nice color shots of both Bot and Alt modes, while pointing out some of his features. The side of the box provides gives us Optimus' Tech-Spec and power scales. 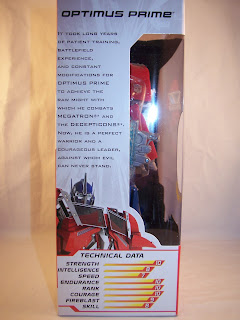 Optimus himself, overall, is a pretty nice figure. Hasbro is really nailing the likenesses of the figures in relation to their animation models. He's fairly well articulated... ball joints, swivels, and hinges aplenty. 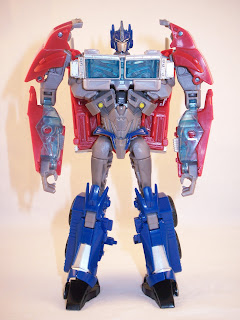 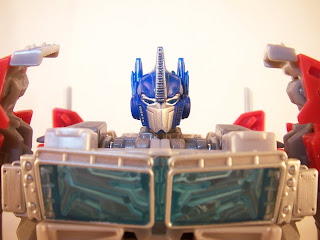 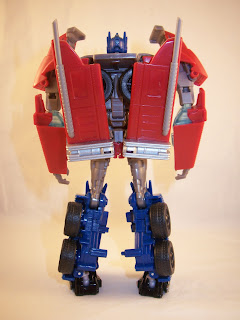 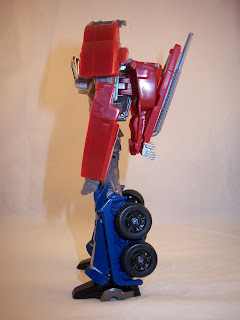 As for accessories. Optimus comes with a cannon and a sword. The sword is pretty small, and unlike the show, where the sword is more a part of Prime, this sword is hand-held. 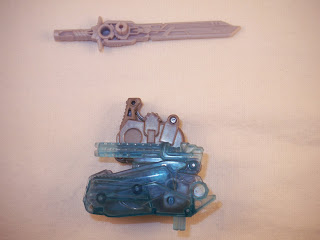 I have to say, my biggest gripe with this figure is the gun. For all intents and purposes, it's a Mech-Tech weapon; you put pressure on the tab and the gun unfolds. While unfolded, it does look like it should be part of Optimus' arm. sadly, like all the Mech-Tech weaponry, you have to "Press and Hold" for the gun to remain extended, otherwise, it just collapses back in on itself. Lame. I was able to keep it extended by getting it braced into Optimus' shoulder. But any movement of the arm, and it collapses back down. I never liked the Mech-Tech gimmick and I'm disappointed to see it here. Oh... and the gun lights up with a red "Energon Glow"... wait... why red? The plastic it's molded in is blue... red makes no sense to me. I feel it's a secondary gimmick that does nothing to make up for the Mech-Tech feature. Meh. 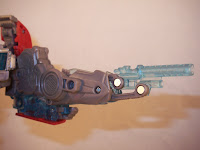 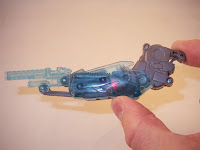 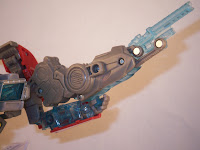 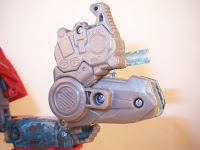 In Alt mode, once again Optimus' look is faithful to his animation design. The cab is blocky and bulky and colored in Optimus' usual red and blue. Autobot icons decorate the truck grill and the top of the vehicle, the icon on the top winds up on his shoulder in bot mode. 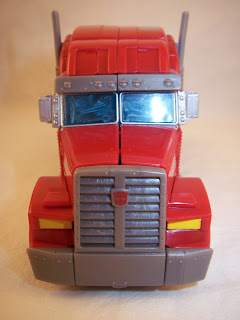 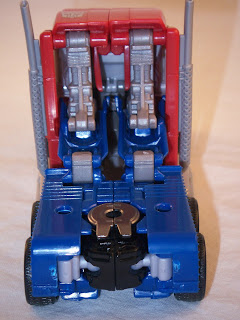 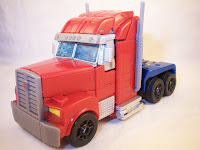 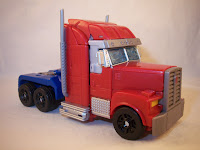 Optimus' weapons fit together an can be placed on the back of the truck... 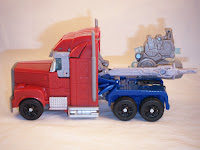 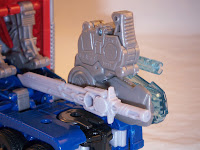 There is definitely a size difference between the deluxe and Voyager versions. Voyager Prime stands a couple of inches taller than his Deluxe version. 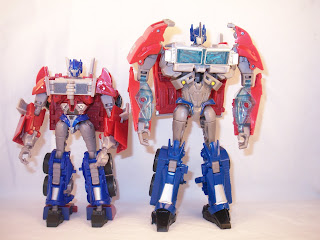 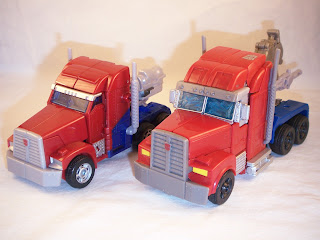 I had seen a previous video review that had talked about the transformations between the two being nearly identical. I didn't feel that was the case. While the overall gist of the transformation is similar, the way the arms and legs are formed are indeed different. Where as Deluxe Optimus's feet are formed from the top of the cab, Voyager Optimus' are folded into the back of the truck. 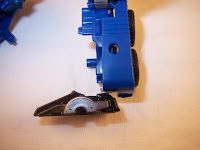 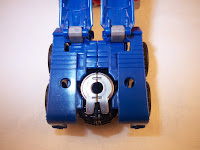 The top of Voyager Optimus' cab splits and then folds together to make Bot mode's shoulders. 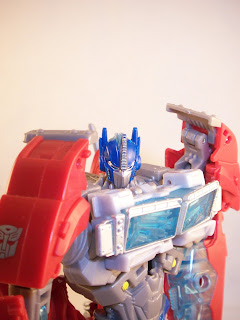 All in all, I was happy with Transformers Prime Optimus Prime... or... Prime Prime. The figure is solid. He transforms fairly easily without needing a lot of odd pressure here and there and no need to worry about popping limbs and pieces off. I'm looking forward to finally getting the normal Deluxe or "Revealer" version and the upcoming Optimus Maximus, the transforming Cyberverse base!

In the mean-time... TF:Prime Optimus with a couple of his predecessors... G1 Prime and Classics Prime... 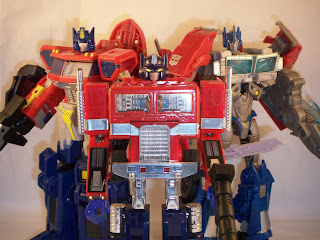 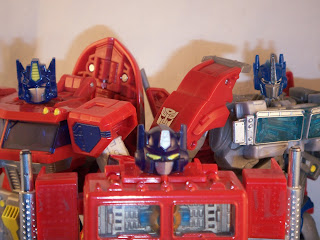