No Transformers this week, but I’ve got the new 6 inch BanDai Classic Lion-O! Jason texted me that he’d found Mumm-Ra and was sure that he’d find a Lion-O soon. Sure enough, within a few hours he had. I’m not totally into Thundercats, but I enjoy the show and I’m always good with having a main character to put on the shelf.

As for the new Thundercats series; with the exception of a few "cram a lesson down your throat" episodes, the show has continued to deliver good writing, excellent character development, and solid animation. Even my wife, who vehemently dislikes the original Thundercats toon, so much so I can't watch it when she's around, actually enjoys the new show and has even gone so far to say that it's good. For the toys, I’m looking forward to getting the new Lion-O to put up on the shelf next to his Classic counterpart.

The packaging is solid; a nice window box to show off the figure and his major accessories. To be honest, when I received mine, the large Sword of Omens had come loose from its spot, so I opened the package and reseated the sword to get a good pic. 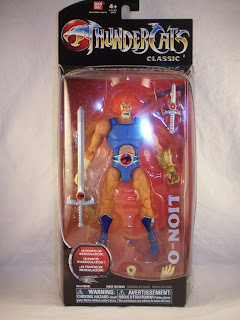 The back of the packaging gives us a quick little run-down on Lion-O himself. We get the typical figure shot and a few pics of his accessories. The bottom shows us what to expect in the coming months… 6inch version of the new character designs! I’ll have to get a Lion-O, but Tigra and Cheetara I’ll more than likely pass on. Though, I do like the new character angle for Tigra… so I’ll have to wait and see. 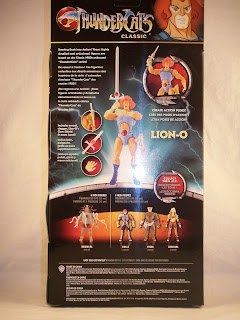 What I really like about the packaging was underneath Lion-O. We get a nice shot of the Thundercats logo on the inside of the packaging. Nothing major, but I thought it was a nice touch. 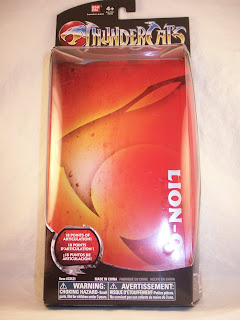 Through the window, we get a good look at his gear… Lion-O comes with both a full-sized Sword of Omens and a ‘stored’ dagger-size version. He also comes with a few different hands; 2 for each arm in open and semi-closed for holding the sword. You can’t see it in the package, but he also comes with his Claw Shield and strap with which to connect it to his hip. 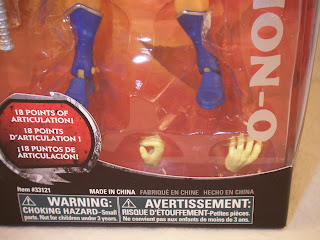 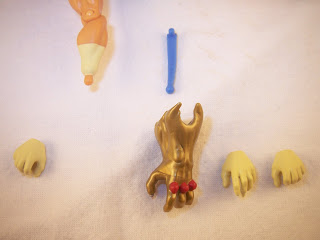 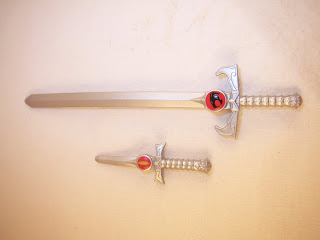 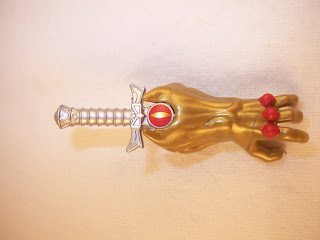 The dagger-sized version of the Sword of Omens fits perfectly into the Claw Shield; and again, via the strap, mounts perfectly onto his hip. 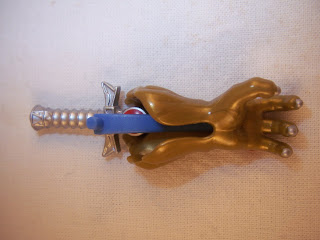 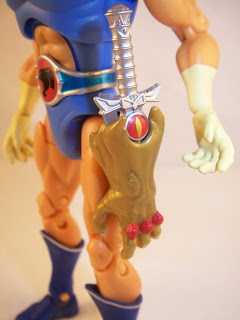 Lion-O's hands easily pop off at the wrists small ball-joints. Both the open and grasping versions of his hands look good. The Claw Shield pops into place just as easily as his hands. 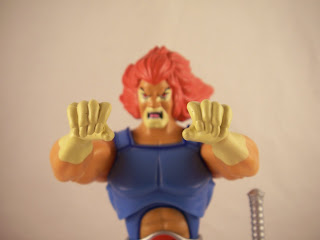 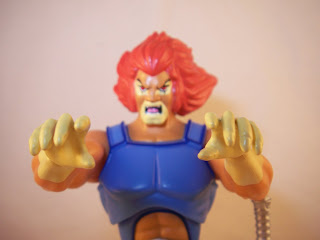 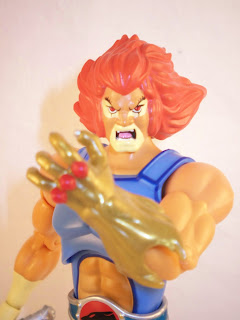 Lion-O’s articulation is pretty akin to the DC Universe 6inch figs. He’s pretty much ball-hinge and hinged throughout. Due to the head sculpt, the ball-joint neck doesn’t do much. He can merely look left and right. His mass of hair really limits any up and down motion. Shoulders, hips, and ankles are ball-hinge; elbows are hinged; knees are double hinged and he has swivels at the tops of his thighs, biceps, and waist. He even has an ab-crunch! 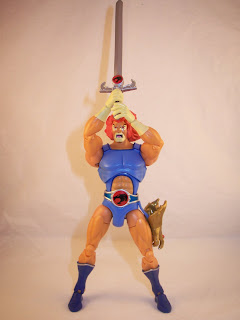 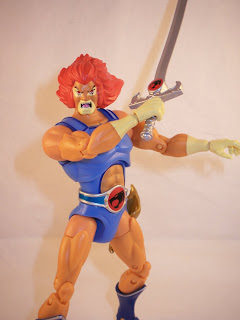 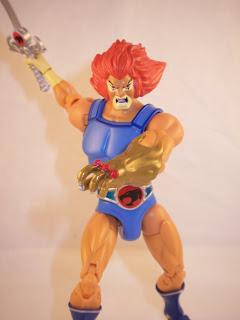 I’m guessing BanDai went with the 6inch line to keep in scale with both Marvel and DCs current and near future offerings. The 8inch line was nice, but out of scale. I know Jason was thoroughly disappointed in the change in scale; his Classic Lion-O, Tigra and SDCC Lion-O are in the 8inch scale. He’s likes maintaining uniformity so this change hasn’t sat well with him. Lucky for me, I didn’t get the previous versions of the figures, so I can have Lion-O and Deathstroke battle it out without worrying about Lion-O towering over him. 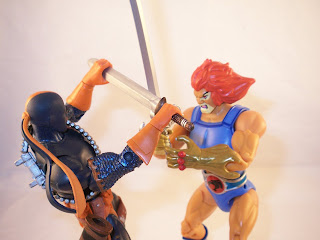 My one and only real coimplaint is the Sword of Omens. It’s made from a flimsy silver/grey soft plastic. My sword was all bent once I removed it from the tray. I think the SDCC Lion-O was the winner here; his sword was vacuum chromed making it nice and solid. Granted, this is for safety reasons. The SDCC version was made for collectors while the previous 8inch and this version were made for kids. Thankfully, previous modeling and miniatures experience helped here. A little hot water helped reshape it, but not too long after the photo-shoot, it had the tray bends in it again. You can see the bends just above the hilt and mid-sword… 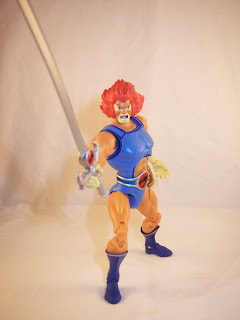 All in all, BanDai’s new 6inch Classic Lion-O is solid. Excellent size, great articulation, and good paint-apps help to make for a great toy. I look forward to getting the updated Lion-O to set on the shelf next to this one. Though, I’ll probably skip the rest of the line as I’m running out of space to display stuff. 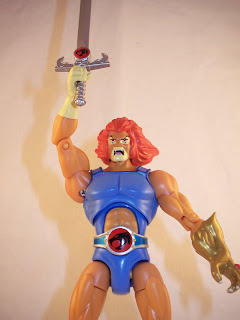