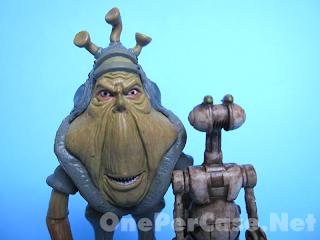 At this point, anyone older than 10 gets it. The PhantomMenace is the weakest link. Putting it out in 3-D isn’t going to help it any, although I’m sure it will help Lucas’ wallet to bulge just a little more. The pod race sequence, was a fun (although a bit long) sequence that was one of the more memorable parts of the film. Throughout the years, Hasbro has dropped out a pod racer figure here and there, and at this point, we’ve gotten a fairly good number of them. If you’re late to the scene, you can even catch up fairly quickly thanks to an upcoming Toys R Us exclusive.

The Vintage Collection has been extremely popular among collectors. Classic packaging and well done figures have almost been enough to stop fanboys from complaining about the $9 price tag. (Yes, almost. Nothing will ever completely stop fanboys from whining.) This figure looks great on the package, and despite being the worst movie, the Phantom Menace packaging (now available in a solid case of 12!) holds its own with the others.

If your name is Ben Quadinaros, I suppose it stand to reason that you would need a podracer with four engines. Well, with great engines comes great responsibility, which in this case falls on the mechanical shoulders of Otoga-222. He’s nothing new, but he is a decent enough pack-in. If I felt that I was paying for this figure, I’d be upset by his vintage-style (shoulders and hips only) articulation, but I choose to look at him as an accessory. Let’s face it, just because a figure is small, it doesn’t mean Hasbro is afraid to put him out solo as a tiny figure (ahem, Wicket?). 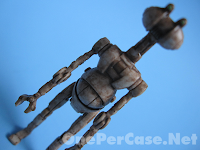 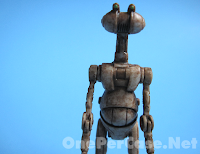 For a guy who is basically a big bulbous head with limbs attached, Ben Quadineros is actually really well articulated. He has ball jointed shoulders and elbows, swivel wrists, ball jointed hips and knees and swivel ankles. No head articulation, but when you have a big ol’ nugget like Ben, it doesn’t move a whole lot. The sculpt looks great, but for some reason the expression on his face reflects the brief moment of anger at his pod’s demise rather than the multitude of dopey, harmless expressions he usually sported. The stalks on his antennae are a bit thicker than they were in the films, but I’d rather have antennae that look a little off than antennae that snap off. 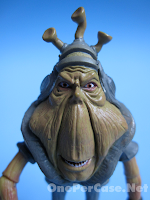 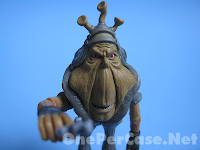 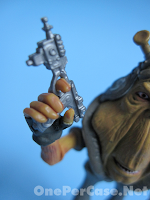 He comes with a pretty snappy looking laser pistol of some sort. While it’s a little small for his hand, if you put his finger on the trigger, it stays in his hand fairly well. One “accessory” that he’s missing… peg holes on his feet. For me, this is a major problem. I don’t ask for much from my figures. All I ask is a cool pose or two, and the power to stand up while in one of those poses. Being a rather precarious figure, he doesn’t stand terribly well on his own. It’s a little drill hole in the foot, Hasbro. Not difficult to do, and vastly helpful. 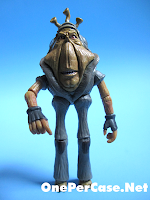 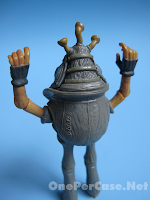 At the end of the day, Ben Quadinaros is a great looking figure and looks great standing next to my other pod racers. Unfortunately, he doesn’t always like to stand and with no peg holes, there’s not much I can about it. Oh wait, I have a dremel. 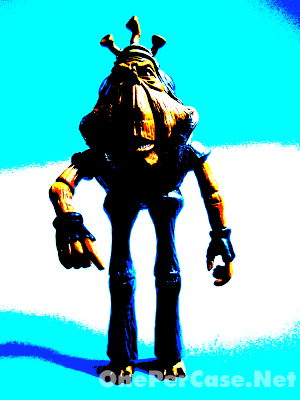