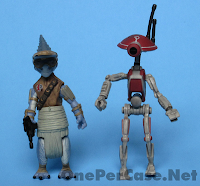 I’m going to go out on a limb and say that Star Wars EpisodeI : The Phantom Menace is the worst of the lot. Poor acting, weak plot, midichlorians… well, you get the idea. It’s unlikely that adding a thirddimension will help any of what made this film as flimsy as it was. That being said, the first of the prequel trilogy did manage to introduce some cool characters (no, not Jar Jar) and awesome aliens. Yes, the pod race sequence was little more than an in-movie video game. In fact, it unsurprisingly spawned games for the N64 and PS2, among others. But hey, I like video games, I like aliens, and so for me, the pod racing was good times.

For over a decade now, Hasbro has been trickling out pod racer figures. If you missed them, you’re in luck. A Toys R Us exclusive PodRacer Pilots Pack will make it easy for you to play catch up. In addition to that, there’s a nice duo of brand new pod racers hitting in the Vintage Collection. The Vintage Collection, with the packaging that has sucked me back into being a carded collector, at least for the time being. The Phantom Menace logo works well on the vintage card, and they’ve chosen a nice picture of Ratts Tyerell. The back of the card now also features a vintage feel, which I totally dig.

Like any serious pod racer, Ratts Tyerell comes with a PitDroid to help maintain his racer. This is the same pit droid we’ve seen many times before, but since he’s basically being included as an accessory, it’s not a bad deal. He’s not overly articulated (head, shoulders and hips) but his paint looks good, and again, in this instance, he’s basically a pack-in, not his own figure. 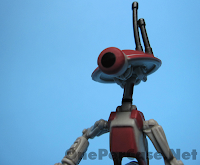 Ratts Tyerell is finally making his character debut in plastic, just like the sticker on the bubble says. Given how many Star Wars figures have been made to date, it’s still noteworthy when they actually make a new character. He seems to be more or less in scale with the rest of the line, his paint apps are well done (nice logo on the chest) and the sculpt looks great. His articulation isn’t overwhelming, but for a figure of this size there’s actually more articulation than I was expecting. Head, shoulders, forearms, torso and hips. While he’s far from super-articulated, he’s really got all of the movement you need from him. 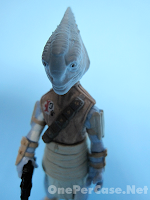 In addition to the pit droid, he comes with his goggle/visor combo and a small pistol. The headgear looks good and fits great. His eyes show reasonably well through the goggles, and the visor not only goes on easily, but stays on well. Sad to say, but form-fitting accessories seem to be a rarity these days. The pistol looks good and stays in his hand as long as you don’t jostle him too much. 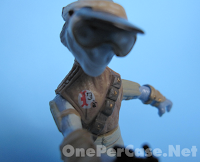 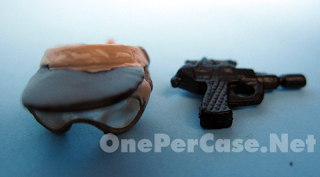 While this figure isn’t anything overly fancy, it is a solid release. If you’re looking to complete your pod racer collection, Ratts Tyerell will make a solid addition. As a bonus, for the first time in a long time, Hasbro has managed to pack this wave of 12 at one per case. If you think you may have trouble tracking this down, you just might want to consider picking up a full case.
Posted by Brett X at 11:23 AM