Sign The Goon Movie Petition… Or You’ll Get A ‘Knife To The Eye!’

The Goon by Eric Powell

If you love comics, movies, and zombies then this is for you.  To get this fantastic movie made we need to sign the petition!  Check out the trailer and try to tell me you didn't like it...

Go get it done!


"Fan’s of Eric Powell’s THE GOON are some of most hardcore and faithful out there and – dammit – we deserve a good film GREAT film to commemorate such a monolithic character! As one of the most recognizable alternative comic characters since Hellboy, the Goon (and his trusted “ward” Frankie) have all the charisma, guts and gonads to make a blockbuster, animated film that will teach all those slackjaw, flesh-biting bed wetters out there just who runs this burg.
Oh yeah, and it will sell tickets too. You hear that Hollywood? THE GOON can make you rich (or at least richer). It’ll sell lots and lots and lots of tickets and we’ve been given the chance to prove it. By signing this petition (see below) you and I have got a real chance to have our collective voices heard by Hollywood and get our kind of film at the box office; animated by BLUR Studios and produced by David Fincher. A film full of zombies, foul language, fart jokes and (yes) inflatable fowls."  (from Strangekidsclub.com) 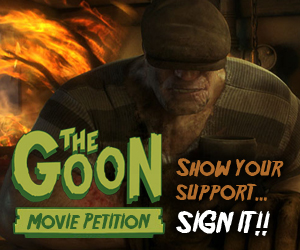 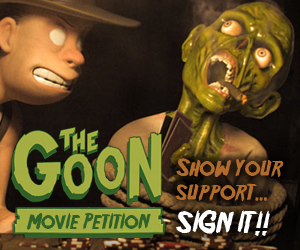