For years, fans of the Transformers movies have been waiting for the ultimate release which would signal a close to the uneven, and sometimes silly, first trilogy.  From a consumer perspective, it was hard to wait through the holiday season as director Michael Bay released a stripped-down Blu-ray release of Transformers: Dark of the Moon.  No special features, only the movie.  And while the film did do a lot to bring fans back after the disasterous Revenge of the Fallen, expecting fans to shell out $19.99 for a feature-less release was too much to ask.

So, when word got out that Bay was releasing an ultimate collection on January 31, it was finally a moment for fans to rejoice.  This seven-disc set contains the 3D releases, as well as new featurettes and a 4-disc release of Dark with nearly 4 hours of special features.  The set also includes a plaque of the movie signed by Bay .  If you have any doubt that this is THE ultimate collection, check out the breakdown below: 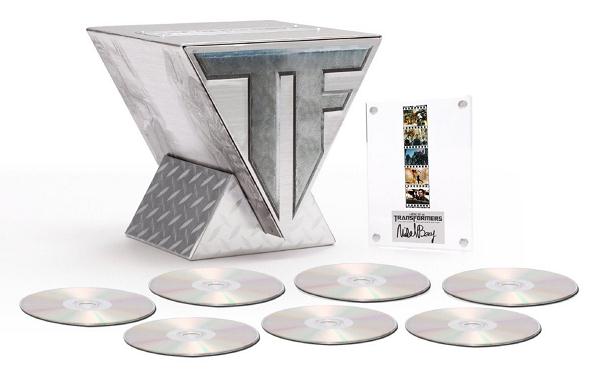 Michael Bay's mammoth release of the franchise includes one of the best packaging efforts seen in quite awhile.

Regardless of whether you like Michael Bay as a director, this release should go down as one of the best overall efforts I've seen since Watchmen released a 2-disc set with Night Owl's ship. If you're still not convinced, listen to Bay talk about the release:

Posted by Matt Cummings at 3:03 PM