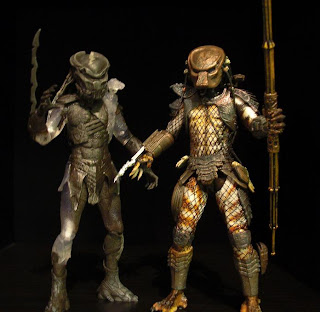 One of the releases I was most looking forward to this holiday season was NECA’s new TRU exclusive “Predators” set, including the masked version of the City Hunter from “Predator 2”, an interesting new cloaked deco for the Berserker from “Predators”, and a metric ton of accessories.

The moment I saw a report online that this set was hitting (while I was getting ready for work one morning), I shot Jason a text message asking him to keep an eye out for me. New figures in this line don’t hang around the pegs of my local TRU for long, and the two-packs even less. Jason just happened to be walking into his local TRU at that moment, and shot back a picture within seconds indicating he had me covered. Bros don’t let bros miss out on awesome action figures. 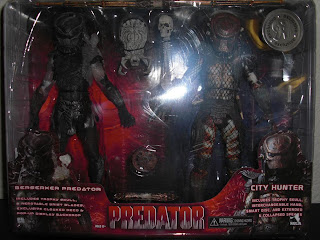 The short version of this review: This set is made of pure awesome. Go buy it. Right now. If you can find it.

NECA has really stepped their game up for 2012 with the new buck being used for the City Hunter in this set, which is also the same buck being used on the recently released wave 4 (that review will be coming soon). My favorite xeno-hunters from the Lost Tribe now feature ball-hinged hips and double jointed knees, in addition to the standard articulation scheme for the rest of the line; ball joined neck, wrists, and ankles, ball-hinged shoulders and elbows, and a swivel waist. This new articulation allows for some great “I’m going to kill you then hang you upside down and skin you” poses. 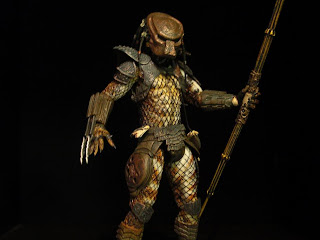 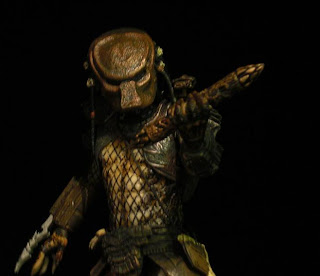 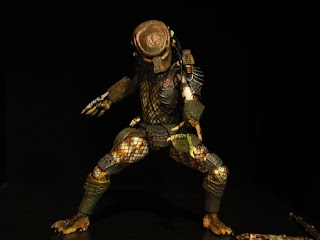 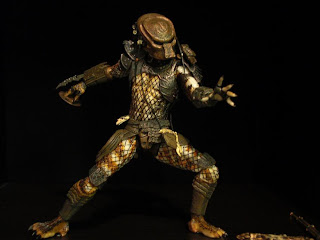 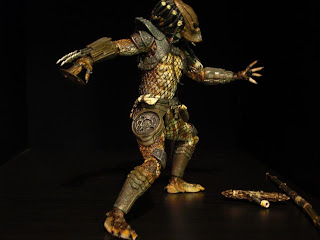 The City Hunter in this set has got to be my favorite figure of the line yet. The sculpting is flat out amazing, especially the mask, which is not included in the single carded release. The deco is great as well, with the armor being a nice weathered copper color, and the skin pattern being nice and detailed. I also noticed that the plastic used for the dreadlocks is softer and more flexible than on previous releases, which helps with the poseability. 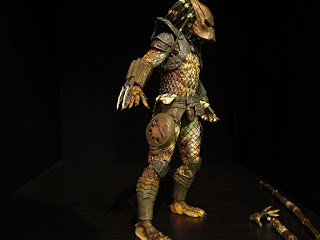 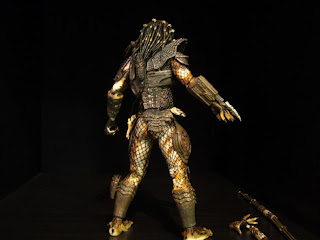 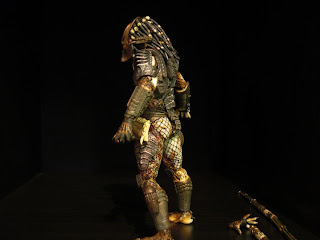 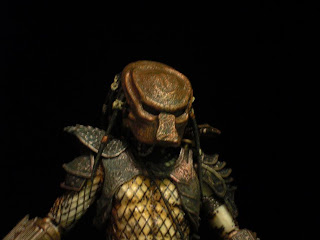 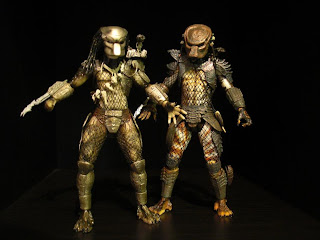 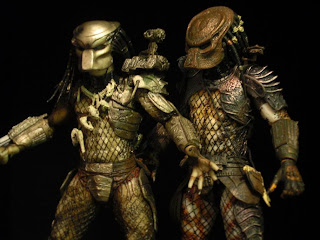 Best of all, this guy is armed to the teeth. His wrist blades retract into his right gauntlet. He’s got extended AND collapsed versions of his combi-stick/spear (also not included with the single release), plus his smart disc and plasma caster. The smart disc fits nicely into its holster on his right leg. A swapable left hand is included to help with holding the spears or the human skull & spine trophy (which is a repaint of the accessory from the SDCC 2011 exclusive Gort Predator). And the figure is topped off with some nicely detailed belt pouches and armor plates, attached with actual cord. This figure just plain rocks, and may be one of NECA’s nicest offerings to date. 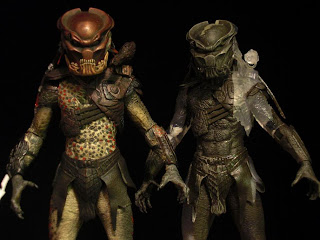 Moving on to the Berserker… This guy is the same sculpt used on previous releases of this character. No new articulation, unfortunately. “But Zak, why should I buy ANOTHER Berserker Predator?” you ask? Here’s why. 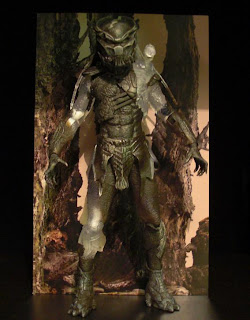 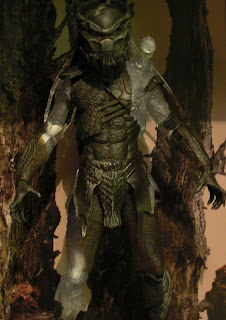 I was a little confused when I first saw this guy displayed at a convention. I didn’t get why parts of him were “cloaked” and parts were painted a strange muddy brown color. Then I saw the main “accessory” he includes and it all made sense. This guy comes with a cardboard backdrop of a forest/jungle scene, and when the figure is posed just right in front of it, he literally blends in to it, emulating the cloaking effect. Holy crap is this awesome! Amazing idea and execution on this feature by NECA. If/when they do cloaked versions of Jungle Hunter or City Hunter, I’d like to see the same effect used.

To top this figure off, he comes with both metallic and “cloaked” versions of his extended wrist blade, plus a very nicely sculpted “Super Predator” skull trophy. Not quite as many accessories as the City Hunter, but still a lot more than you’d get in most single carded releases.

Despite all of this awesome sauce, once I had the set in hand, one thing that had me just as excited as the figures themselves was the packaging. Or more specifically, the cross-sell on the back of the packaging. Anyone who keeps up with this line had to know it was coming, but pictured (to my knowledge) for the first time ever, are the remaining six figures in the Lost Tribe (the tribe that shows up in the ship at the end of Predator 2 to carry off the carcass of City Hunter). OMFG. I think I actually said those letters out loud when I saw them. I cannot wait for these next couple waves to come out! Having all 10 members of the Lost Tribe standing on my shelf might give me a nerdgasm every time I walk past it for the rest of my life. 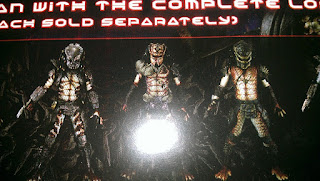 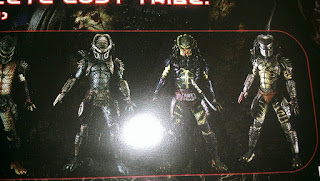 My one, and only, gripe about this set is the same issue I have had with at least one figure in every wave of this line: Stuck joints. Considering that they are a smaller, lesser distributed, toy company, I think NECA does a lot of things really well that the bigger guys could take a cue from. But the one thing I’d really like to see them get better at is quality control. Joints stuck to the point of almost breaking when you try to move them seem to plague this line, and unfortunately, my City Hunter in this set was no exception. When I got him out of the package, his left hip ball hinge was completely stuck. It took me half an hour of heating, cooling, slowly working the joint, and then finally carefully separating it with an exacto blade before I got normal movement out of it. And the whole time I was worried that the joint would snap. But in the end, there was no permanent damage, just minor frustration, so I can’t complain too much. 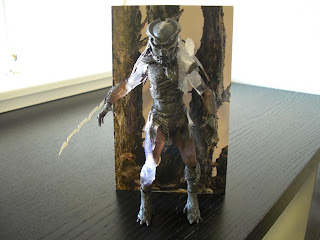 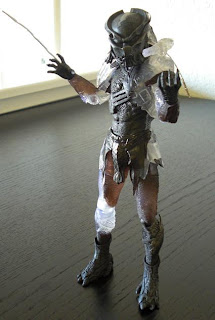 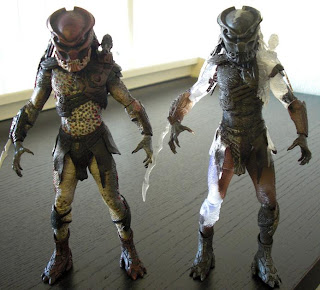 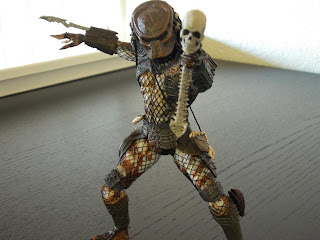 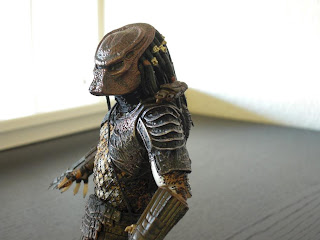 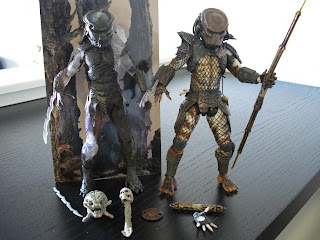 I really can’t give this set enough praise. The new tooling and articulation on City Hunter is awesome, the deco on both figures is awesome, the cloaking gimmick is awesome, and the arsenal of weaponry these guys include is awesome. It’s like the head of NECA went to their designers and said, “OK guys, I need you to take all that extra awesome we have laying around, put it in a package, and sell it as an exclusive”, and then the designers said, “OK boss” and did it. Or at least that’s how it plays out in my head.