Most Disappointing Blu-Ray Releases of 2011

Releases this year stretched the gamut.  Which ones failed to meet expectations?


Hollywood just can't get it right.  Each year, we movie fans are treated to an uneven, almost frustrating menagerie of home video releases.  In past years, Hollywood got these releases right: nice packaging with special features, most of which is not hard to achieve.  And while many 2011 releases acheived this goal, several did not.  This year in particular saw several releases (standard and steelbook) which frankly boggled the mind, both in their overall quality as well as one weakness which ruined the whole effort.  In determining my list, I looked at highly-anticipated releases that failed to match expectations.  Here now, the duds of 2011:

At first, this set, which includes Cars, Cars 2, and Cars Toon Mater's Tall Tales, looked like a nice set for the price: discs came out to about $8 each, all in 3D, blu-ray, DVD and digital copy, with all special features in hi-def.  But when you opened this set, which measures about 8"x6", you are shocked to see that the discs are not locked in a protective case, but merely sit on their sides in the metalic-looking box that is not secured with a locked cover.  Instead, the discs are merely covered over by a racing flag!  This sort of impractical approach kills an otherwise good release: this could have been a great travel set if the company had simply packaged the discs better.  If you have young kids, this is not the set to buy, as the flag will get stained and the discs will no doubt be covered in fingerprints.  But the problems do not end there: the box is really too tall, with more than half of it unused, leaving you with a gangly item to display.  Cars 2 did well in theatres ($500 million on a $200 million budget), but this particular release, which was part of at least four different types, just misses the mark.

Click this link to see a good unbozing as well as the disc storage issue: http://tinyurl.com/6q9g5vr

For a film which did well in the theatres, and mostly topped everyone's expectations, the American Blu-Ray release was, in a word, pitiful.  The only substantial offering came from Best Buy, which featured a standard slipcase with a non-embossed front cover and an image from the first Cap comic released on the rear.  What's worse, releases in the UK, Germany, and France received a proper treatment, with an embossed steelbook of Cap's weathered shield on the front and a great image on the back.  Lemme get this straight: an American movie about an exclusively American hero, and the best we Americans get is something close to a half-assed effort?  We deserve better, and Marvel really dropped the ball on this one.  Although the 3D version did have an embossed cover, most of us know the lies about 3D and will not invest in its current form.  But even with that, why were American audiences denied a quality Captain America release?  I will admit that the special features are good, including the fun short film "On the Way to Thor's Hammer." People will remember a home video release much longer than the original theatrical experience; sadly, this release will leave a negative image in people's minds when compared to its European counterpart.  For images of that release, please visit my posting HERE.

Once again, a great Marvel film is tripped up by its Blu-Ray release.  Like Captain America, the release of Thor was highly anticipated, met everyone's expectations, and furthered the continuing storyline leading up to May 2012's release of The Avengers.  And just like this Captain America, this release of Thor was one of the most disappointing of the year.  Again, fans are (mis-)treated to standard, non-embossed slipcover with Thor #1 on the back cover.  Although the disc contains some nice special features, among them the short film partner to Captain America, titled "The Consultant," this release just did not make the impact it could, when comparing it to releases made in Europe.  It simply baffles me why Thor and Captain America received these releases. 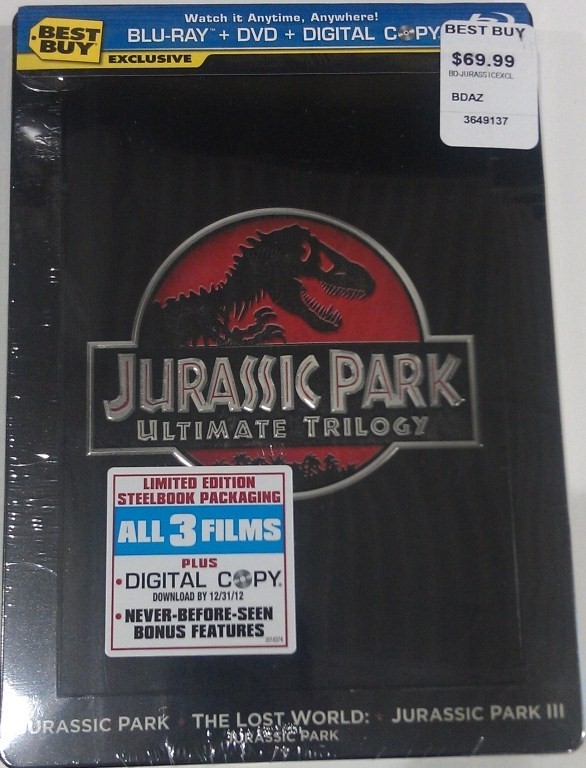 With the release of the trilogy for the first time on Blu-Ray, fans were given several nice releases, including a set in silver packaging, and another set with the T-Rex at the doors of the park.  The BB exclusive, which featured a steelbook release, failed for two reasons: lack of interior artwork and cheap aluminum in the book itself.  The European release improved on both issues, which made the American release so much harder to swallow.  Having said that, I was less crushed at this release than the three releases above, as the steelbook isn't bad; but my opinion of it has soured some over time.  To see a video review unboxing, please click HERE.

I might be digging deep here by doing another steelbook release, but this one from the UK really surprised me.  Given the fact that UK steelbook releases were so strong this year, I was particularly disappointed by the lack of quality control here.  The American release (no steelbook BTW) was good enough: embossed slipcover cover with nice special features and an excellent transfer.  The UK release, which arrived in my mailbox twice (guess in my excitement I hit the BUY button more than once), does a fair job on the cover, with a smooth but somewhat dim cover.  The real loss here is the lack of inside artwork: the inside is merely silver casing.  Not sure why the ball got dropped, but its effect looks more like a 2011 American release; add to that, the huge identifiers on the back cover and you've got a release that failed to meet expectations.

Granted, Futurama hasn't been given its fair shake by Fox.  Moved around, then cancelled, then made into TV movies which were later broken up into season 5, the show has returned and settled in with a nice assortment of geek and tech humor.  However, the packaging for the Blu-Ray release is shoddy to say the least.  The paper is flimsy and is thinner than the amaray cases most studios use.  Place the two-disc set, which only comes with 13 episodes (leftovers from season 5) in an amaray and Futurama never makes it to this list.  Add to all of this the fact that my version came crushed by the mail and won't stand any longer, and you have a WTF Release.  Too bad, because the show is pretty funny...

Sure, many releases this year were good, several were excellent, but most came from outside the States.  Hollywood needs to offer American audiences the best releases it can, and really balance fan needs with price realities.  Obviously, this structure made sense in Europe and Japan, and both had their fair shares of economic and natural disasters.  American audiences deserve better.  What the studios don't understand is that if we are given the best releaes possible, we will probably used any money saved on shipping to buy more discs.   Hollywood, are you listening???
Posted by Matt Cummings at 9:00 PM