Man, Hasbro’s 3.75” Marvel figures just get better year after year, and 2011 was the best yet, not just for the main Universe line, but for the offshoot/movie lines as well. Let’s take a look back at a kick ass year for being a Marvel collector.

This list is what the writing staff of this site consider to be the best of the best. We started with a much longer list, and through many rounds of heated back and forth debate (I thought Brett might actually reach through the screen of my smartphone and strangle me if I didn’t include Silver Samurai), this is where we settled. Note that we didn’t rank these. That might’ve actually started World War III. I don’t think anyone could definitively say “this is the single best figure of the year”. These are just the ten that any Marvel figure collector needs in their collection for the year.

First off, there were just too many outstanding releases to keep this list to only ten, so let’s start off with a few honorable mentions. 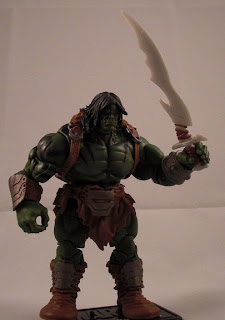 Skaar (Son of Hulk) – Based on the Juggernaut buck, but with newly tooled parts and accessories, this guy just looks big and mean. There were two variants of the stand available, one naming him “Skaar”, the other “Son of Hulk”. 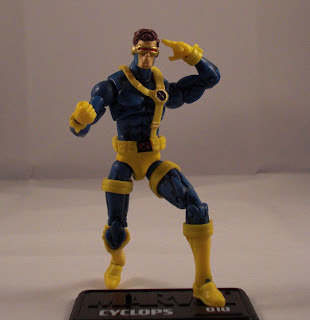 Cyclops (Jim Lee costume) – This figure was the debut of a new, highly articulated male buck that includes all sorts of awesome articulation, from the now standard new ball/hinge combo to the ball/rocker ankles, allowing for much more dynamic action poses. This guy also helps to fill out our 90’s-era X-Men. 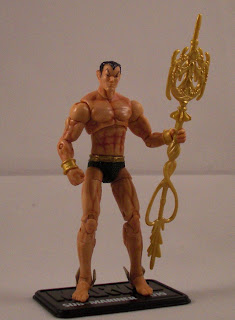 Submariner (Imperius Rex) – While this guy is basically a re-do of a figure from the 2009 SDCC exclusive "Invaders" boxed set, he’s a welcome re-do, and another great use of the new Cyclops buck. The flesh tones on this guy were well executed, and there were two variants to his stand, one naming him “Submariner”, the other being his lesser known title, “Imperius Rex”. 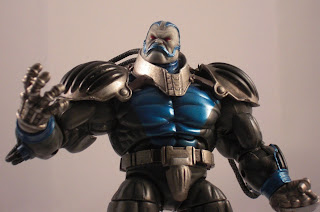 Apocalypse – Also based on the Juggernaut buck, this guy just looks awesome. Great detailing in the sculpt, great deco. Only two things could’ve made this guy better: Longer legs, and being in his classic costume. 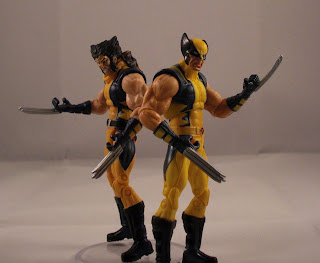 Astonishing Wolverine - With so many Wolverine figures in this line, it's hard to believe that it took almost three years to get his "Astonishing X-Men"/modern-ish costume. This figure is actually a retool/repaint of the extremely hard to come by "Fastball Attack" Wolvie from the tail end of the XMO:W line, and was a highly demanded release by the many collectors that never saw that pack available (it usually sells for upwards of $100 on ebay, IF you're lucky enough to see it listed). The only thing that could've made this figure better would be if it came with an alternate unmasked head and cowl from the original release, in addition to the awesome new head sculpt. 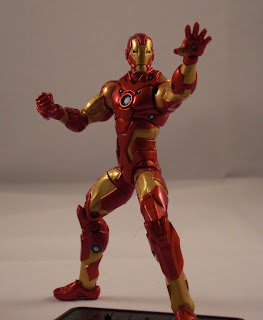 Bleeding Edge Iron Man (Modular Armor) - Considering that the market has been flooded by countless dozens of different Iron Man figures over the last couple years, it's pretty tough to get excited about a new one, but this figure based on Stark's most recent look in "The Heroic Age" was actually a pretty damn impressive offering. Outstanding articulation, great sculpt, and sharp deco made this guy worth picking up. 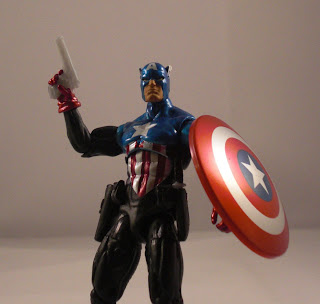 Heroic Age Captain America (Cap Movie line, Comic series) - Speaking of the Heroic Age, this guy deserves an honorable mention just because it was a HUGE improvement over the lame-tastic original release in 2009's Gigantic Battles pack. The body proportions are much more realistic, and the sculpt and articulation are impressive. Too bad the shield accessory he came with sucked. 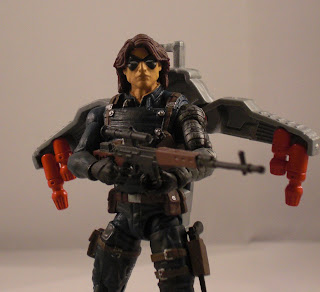 Winter Soldier (Cap Movie line, Comic series) - Yes, it stung to get this release so soon after both 2010 MU releases, and a lot of collectors didn't buy him just for that reason, but really guys, this version of Bucky's earlier identity blows the 2010 version away. MUCH more detailed sculpt, great accessories, this guy basically looks like a miniaturized version of the Marvel Legends release. If you haven't already, scrap the crappy MU version and pick this guy up. 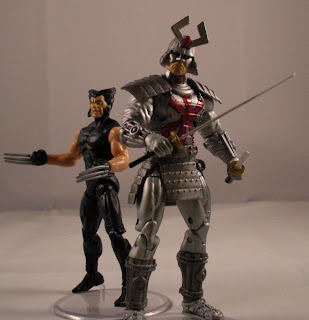 Silver Samurai & Patch (Comic Pack) – That’s right, we said “Top Ten releases”, not “Top Ten individual figures”, just because there were so many good comic packs this year that we couldn’t fit everything into a list of ten. Patch (Wolverine) in this set isn’t bad, but the real star of the set is Silver Samurai. A completely new, completely unique sculpt, with awesome metallic deco and two accessories, both being unique swords. This guy alone is worth the cost of the pack. 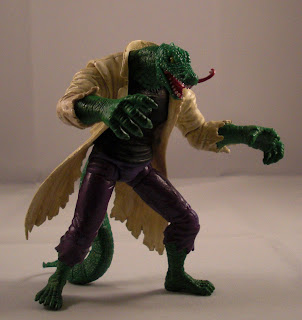 Lizard (Spider-Man line) – While not technically part of the MU line, this guy fits in nicely. He’s got a big, imposing sculpt, great deco, and unlike most figures in the kid-targeted Spidey line, he’s not covered in ridiculous neon paint and absurd accessories. Just a clean representation of the character’s classic appearance. 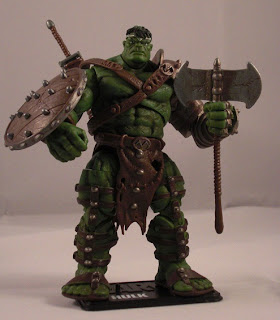 World War Hulk – This figure is the one that really made us realize just how subpar the previous Hulk Figures in this line are. A brand new sculpt, great articulation, spot on deco, and lots of accessories made this guy a great figure to kick off 2011. This is also the figure that made collectors start salivating for an updated “normal Hulk” done at this caliber. Luckily, that figure will be out early this year. 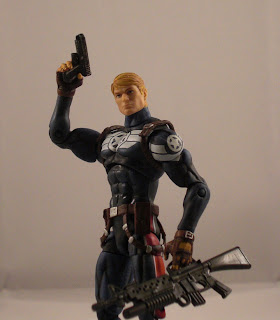 Steve Rogers Captain America – Let’s face it, in a year dominated largely by various figures of Cap, it’s not surprising that at least one version made this list. But this is probably the least “Captain-y” version of the Star Spangled Man to see release this year. While not the first figure to use the new Cyclops buck, it’s one of the best looking to date. The articulation, deco, and accessories are awesome, and best of all, we now have an “unmasked” Steve Rogers head to swap onto other Cap figures. Also best of all, this guy didn’t include a snow board or a buzz saw launcher! 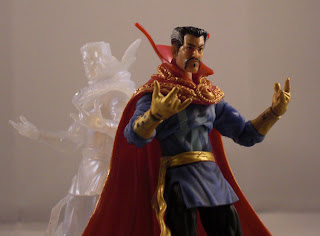 Dr. Strange (and Astral Form variant) – Maybe not the most exciting character to some, but you can’t deny an awesome action figure when you see it. This guy features tons of new tooling, loads of articulation (ball hinged wrists!), and had probably the coolest variant of the year, if you could track it down. The Astral Form version of Strange even included an Astral Form display stand, the only not-basic-black-plastic stand in the entire line. 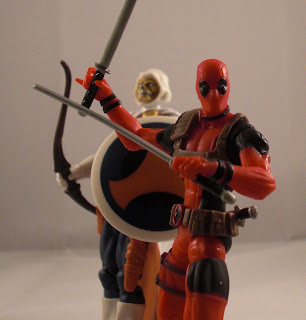 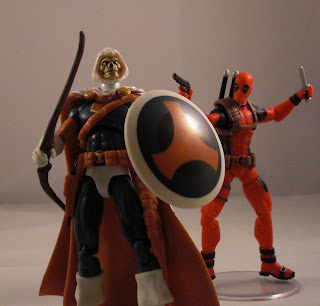 Deadpool & Taskmaster (Comic Pack) – Deadpool is an always-in-demand character, and while this figure wasn’t entirely new, the new head, hands, web-gear, and loads of accessories made him a real stand out in the line. Then there’s Taskmaster, another awesome character, made with a great combination of newly sculpted and re-used parts, top notch deco, and plenty of accessories of his own. It’s no wonder this set was almost impossible for most collectors to find at retail all year.

Crossbones (Captain America line, Comic series) – Not technically an MU figure, but he fits in perfectly. And entirely new sculpt of a character not yet done in this scale, great articulation, and enough weaponry to fend off an entire army of SHIELD agents, this guy is a very welcome add to our ranks of villains. He was also available with different deco in a Target-exclusive comic pack. 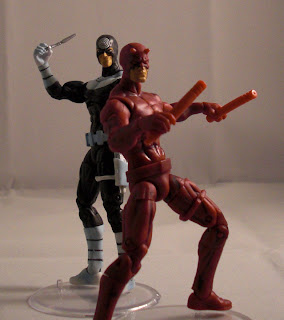 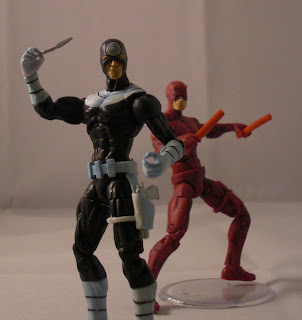 Daredevil & Bullseye (Comic Pack) – Yeah these guys are both re-do’s of figures from Series 1, but that didn’t do anything to stunt fan demand for this set. Not even widely available at retail yet, this set is already clearly a fan favorite. Both re-do’s were completely necessary, given the huge step forward in sculpting this line has seen since 2009 (seriously, those original molds sucked hard), and what better buck to use for these two than the brand new Cyclops buck. Aside from the awesome new sculpts and tons of articulation, these guys each include multiple accessories, AND holsters to store ALL of them. After seeing these, there is no excuse for Hasbro not to execute every figure going forward at this level. I can’t say enough for how awesome this set is. 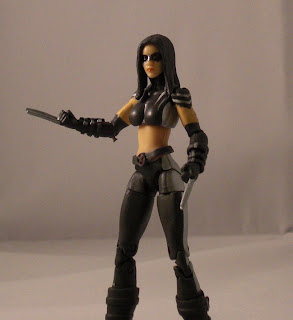 X-23 – YES! FINALLY! A NEW FEMALE BUCK! I think those were the words exclaimed by every collector and fan-boy alike when this figure was released. This figure is MILES beyond the previous female buck used up to this point, incorporating enhanced articulation all throughout. To date, this is the only figure released using it. In addition to the awesome new sculpt, the deco was pretty sharp, and she got us one step closer to having a completed X-Force team. Besides, who doesn’t love having a female version of Wolverine to kill baddies with? 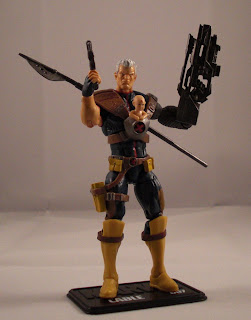 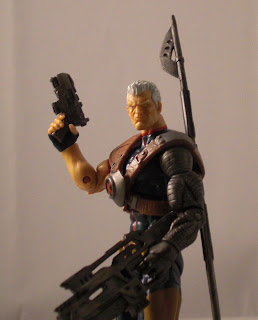 Cable – Finally, someone for Deadpool to talk smack to! This figure uses a new buck, similar to the Cyclops buck, but larger and taller. The articulation and sculpting are top notch, and cable is loaded with weapons, including a pistol that fits into the holster on his right leg, a newly sculpted rifle that plugs into the harness on his back, a spear which can also be stored in the harness on his back, and, for those lucky enough to find the initial run of this release, the “X” piece on the front of his harness can be swapped out for a version carrying baby Hope Summers. This figure is the perfect example of how awesome the Marvel Universe line can be when Hasbro puts some elbow grease into it.

So there's our top ten 3.75" Marvel releases for the year. But this best-of article wouldn't be complete without mentioning one more outstanding release that's not technically 3.75"... 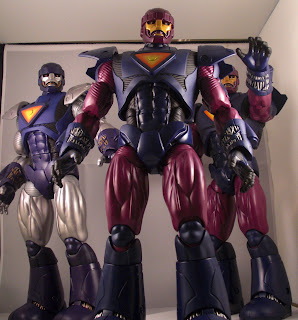 Sentinel (Masterworks series) - Anyone that collects X-Men figures needs at least one Sentinel in their collection to keep the mutants in check. This impressive behemoth features electronic lights and sounds, a ton of dialog clips, and all the articulation you would expect from a smaller 3.75" figure. It was available in a couple different color schemes starting with the SDCC release of the classic colored Sentinel on a giant over-sized blister card, the mass-retail release in the apparently made up purple and silver colors, and then the classic colored release again in retail packaging, so far only available through online retailers. Being a sucker for giant killer robots, I bought, and opened, all three releases. And any of them are worth picking up if the price is right. These things are 16 inches of pure badassery. We'll be doing a separate write-up on this monster later.

So there you have it. Judging by what we've seen for 2012 so far, coming up with this list next year is going to be even more difficult. Disagree with anything on this list? Sound off in the comments!
Posted by Zak Sousa at 8:46 PM