I mentioned in my Electro variant review that Hasbro has recently started a new trend of unannounced "SURPRISE!" variants in this line. One such example is this guy, a "lightning" deco variant of the Series 2 "Thor reborn" figure. 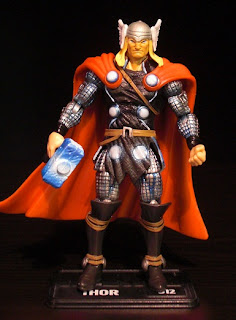 A few months ago, photos from various Asian market-based members of different forums started popping up around the interwebz, featuring this Thor repaint, along with a lighter blue repaint of his wave-mate, WW2 Captain America. Nobody knew at the time if the figures were customs, knock-offs, or variants Hasbro had not yet announced. 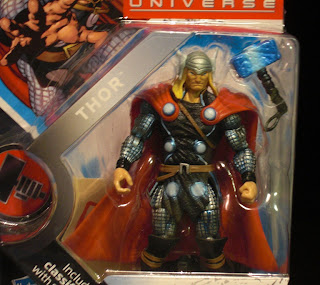 Then back around the beginning of December, several US-based collectors on different forums reported finding these figures at a retail chain called "Family Dollar". Apparently they were packed in an otherwise unknown assortment (i.e. not available to the mass market) that also included Wolverine (Xavier School uniform) and Extremis Armor Iron Man. Yes, just those four figures. And only Thor and Cap had new paint jobs. Strange, right?

As soon as I saw this figure, I wanted it. Unfortunately for me, there are no Family Dollar stores in California, and this variant has yet to show up in any other retailers or known case assortments. I had to work a trade to get mine. 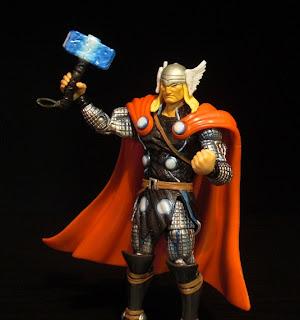 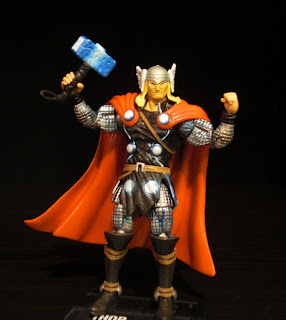 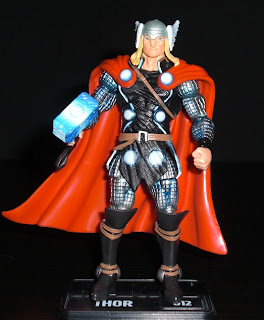 But he was worth it. The deco on this guy, to me, seems to be inspired by last year's SDCC exclusive Marvel Legends Thor. I'm not a Legends collector, I like to stick to the 3.75" scale as much as possible, but I gotta admit, that SDCC Thor had me tempted. I really liked the lightning-reflection deco. So as soon as I saw a similar deco on this 3.75" version, I was sold.

The sculpt is the same as the original release, and the comic pack repaint, and the Toys R Us exclusive light-up base version, and the upcoming "New Avengers" team box set version, so this figure isn't exactly hard to track down if you just want an awesome modern version of Thor. But of all the previous and known upcoming releases of this figure, I think this is by far the paint job I like the most. It stands out like a sore thumb, which in this case, is a good thing. 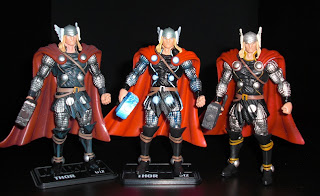 The original release featured very subdued colors; a dark red cape, dark blue tunic with a subtle black wash, and dull silver armor. The lines on the tunic were a basic brown, and the six discs on his torso were the same dull silver/grey as the armor. The comic pack release basically just brightened all the original colors; brighter cape, brighter silver for the armor, black tunic. The light up base version was basically identical to the comic pack, except he had black gloves (I didn't even waste my money on that one). 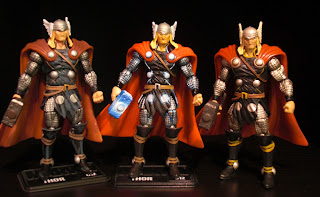 This version retains the brighter red for the cape, the bright silver for the armor, and the black for the tunic, but now introduces blues and whites nicely blended together to give certain parts of the figure a luminous appearance. The lines on the tunic, the six discs, and even Mjölnir all look like they are flowing with lightning. The rest of the armor is a bright silver with a great transparent blue wash that makes the armor seem to glow. This is a great figure made even better with a great new paint job. 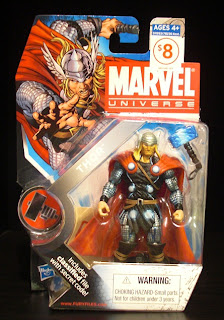 The packaging on this guy is the same as the original, so no changes there. Nothing to indicate that it's a variant of any sort without paying attention to what's inside. Most of the samples I've seen have the Family Dollar price tag ($8) sticker on them, which may be unwelcome for carded collectors, but since I'm an opener, this didn't bother me.

This figure is absolutely worth picking up, if you can find it locally, or have access to it through a friend or trading partner. At the time of this writing, it is unknown whether this figure will ever make it to major mass market retail, so it's not yet common or easy to find. Due to this, ebay prices seem to be all over the place. My advice is, spend at your own risk. Knowing Hasbro, I wouldn't be surprised if this version was warming every peg in Target, Walmart and TRU three months from now. But then again, this could turn out to be one of those truly rare figures that shows up for only a brief time in limited quantities, and then disappears forever (remember Vision?).