Through its Architect Series, LEGO pays tribute to the most badass architects and structures of all time. From the Empire State Building to the Guggenheim Museum, LEGO Architect is an appealing series to both LEGO fans and artsy-fartsy types alike. (Aside: I'd like to see The New Yorker use the term 'artsy-fartsy.')

If you like functional design and articulation, you'll love LEGO's interpretation of Fallingwater, a 1935 vacation home designed by Frank Lloyd Wright--arguably one of the best architects of our modern era. Originally constructed from reinforced poured concrete, LEGO makes it easy for us mere mortals to 'play architect' as we build Fallingwater from the functional bricks we've grown to love since childhood.


Check out the video of my Fallingwater experience below... 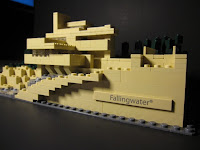 What is cool about Fallingwater--and Wright's design athesthic in general--is that he designed the structure so the waterfall on the property actually runs through the home.

The property owner who commissioned Wright was confused at first--he thought the architect would design a home so residents could view the waterfall from a distance... through windows. But that's not how Frank rolls.

He was all like, "Look at the waterfall? From a window? Screw that! I'm building this house on top of the waterfall and you are going to live in the waterfall. We're getting crazy up in here!" (Not an actual quote.)

Needless to say, Fallingwater is much more than a building. It is a functional piece of art. 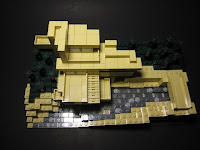 And really... isn't this part of what draws us to collecting in general? We look at the sculpt of a figure, judge the figure based on its functionality, the accessories it comes with, and how true to life it is compared with its likeness in a comic book, cartoon or movie.

LEGO's representation of Fallingwater does all that and more by incorporating a unique "pull-apart" interactive feature: you can literally slide a section of the house out to reveal intricate details inside the home. LEGO Architectural Artist Adam Reed Tucker explains that the "design challenge was in figuring out how to cleverly disguise, in an almost puzzle-like design, where the model comes apart without distorting one of Mr. Wright's most recognizable achievements."

If only all designers were so passionate about staying true to the original.

The owner of Fallingwater donated the structure to the Western Pennslyvania Conservancy and it is now open to the public year round. Fallingwater is listed in the Smithsonian's Life List of 28 Places to 'visit before you die.'

Check out the video of my Fallingwater experience...
Posted by The Liz Army at 4:33 PM