I’m going to preface this article by saying, hello, my name is Zak, and I’m addicted to army building.

Now that that’s out in the open… let’s take a look at what I consider to be one of the coolest army-builder figures of any 3.75” Marvel line yet, the Hydra Attack Trooper comic colored variant from the Cap movie line.

Judging by what I’ve seen on several forums, a lot of people don’t seem to be aware that there are FOUR different single carded Hydra figures in this line (not counting the deluxe “Dark Threat” guy with the big old flame throwers).  Wave 3 gave us the #12 “Hydra Armored Soldier”, and wave 4 gave us the #15 “Hydra Attack Trooper”.  Each of these figures came in both movie and comic inspired deco, with the comic deco being the rarer of the two (at least in my area).  I had trouble finding the movie versions at retail, but eventually got the eight of each that I wanted, but I have to this day only seen one comic version at retail, an Attack Trooper, that I just found at a Toys R Us last week.  The rest of my comic versions came from online trades and sales (and thanks to EvilAnimation of various collector forums fame for hooking me up with a bunch of these). 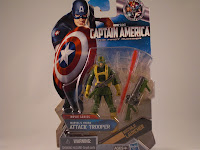 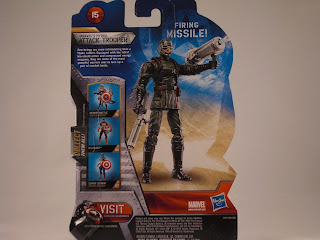 The packaging for these guys is nothing remarkable, using the same cardback as every other figure in the line, and with a cheesy bio on the back saying something along the lines of “these guys have really big missile launchers and only Captain America can save the day!”.  For the super-OCD amongst us, there is apparently a cardback variant for this guy, advertising different figures in the cross-sale (with wrong photos), but I haven’t personally noticed this, and not being a carded collector, I can’t say I really care.  But for those that do care, and weren’t aware before but are now cursing my name because they have something new to hunt down, you’re welcome.  To each their own.

Looking at the figure itself, it’s easy to see why the less observant of the collecting community wouldn’t notice that there is an “Armored Soldier” and an “Attack Trooper”; they’re basically the same figure (also, Hasbro never promoted these guys at a convention).  The body sculpt on both is the same, only the head and gun are different.  They even both include the same giant missile launcher.  The Armored Soldier has a slightly larger gun, and a beefier, errr, “armored” helmet, while the Attack Trooper has a smaller gun and head.  In the package, without noticing the name and figure number, the only easily noticeable difference is that one figure has his weapons on the left side of the bubble, the other on the right. 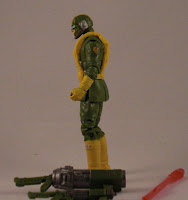 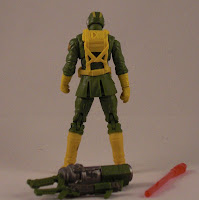 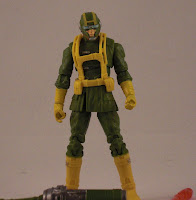 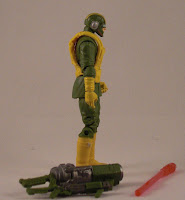 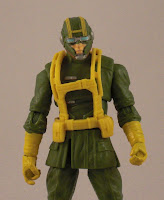 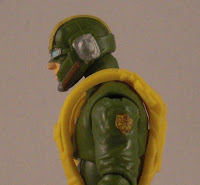 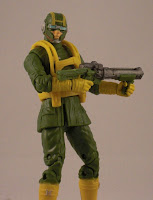 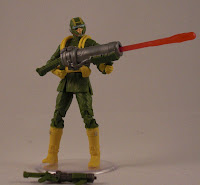 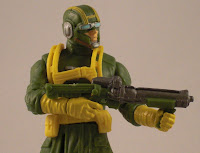 The deco on the two movie versions is nearly identical, but there is one significant difference between the two comic versions:  The Armored Soldier has brown webgear, while the Attack Trooper has yellow, making him more comic-book-y (yes, I just made that an adjective).  These two comic versions also lack one thing the movie versions both have:  The silver ammo belt strapped to the figures’ right arm. 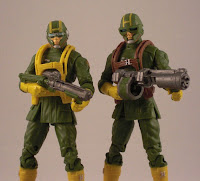 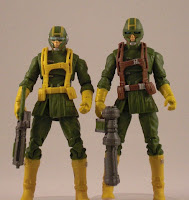 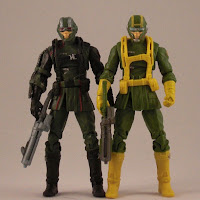 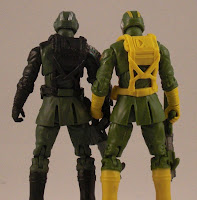 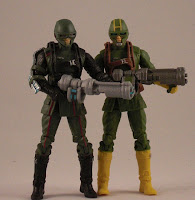 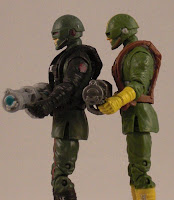 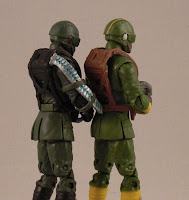 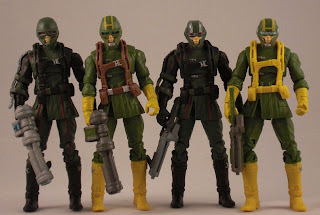 Now that we all understand the differences between the four different versions… the figures themselves are actually pretty nice.  They feature a high amount of articulation, including ball socket head and torso, ball hinged shoulders, elbows, hips and ankles, double hinged knees, and swivel wrists (something a lot of figures in this line surprisingly lacked).  The “skirt” unfortunately makes it difficult to use the ball hinged hips, but they’re not a total loss, and you can still get these guys into a kneeling position (sitting is a different story). 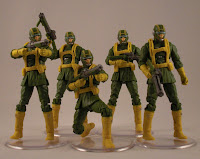 The sculpt is nicely done, and does a great job capturing the detail of these guys from the movie.  I especially like the helmet design on the Attack Troopers.  It looks high-tech (for WWII era) yet practical, and even manages to incorporate the Hydra "H" design.

The paintjob on these guys is more or less spot-on, too.  The movie versions look like they did in the movies (I personally loved the color design in the movie.  Face it, bright green and yellow would look stupid on evil Nazi-esque soldiers in real life), and the comic version of the Attack Trooper looks pretty damn close to how these guys look in the comics, considering that it’s using a sculpt based on the more detailed movie design.  I like that the webgear on the Attack Trooper is yellow, and again resembles the “H” on the front of the costume in the books.


The comic version of the Armored Soldier looks good, too, but his brown webgear gives him a slightly more realistic look, almost like an in-between of the “real world” and “comic book” designs.  Neat, but doesn’t really fit completely into either catergory.  Another nice detail is the small Hydra logo stamped on the left shoulders of these guys, but unfortunately, some of them are sloppy and off-center, and the "comic" Armored Soldier lacks the logo altogether. 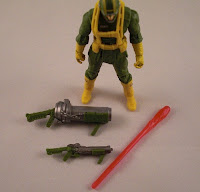 Accessory-wise, I can’t really complain.  These guys come with giant ridiculous spring-loaded missile launchers, which the kids will dig, but I could do without.  Luckily they also include the more movie-accurate (read: collector-friendly) guns powered by the cosmic cube’s energy, which look pretty close to how they looked in the movie, so they do what they’re supposed to do.  I’m a big fan of figures including lots of accessories (one of the main things that sucked me back into the GI Joe line in recent years), but considering that these goons weren’t really armed to the teeth in the movie, I don’t feel like anything is missing here.

When these guys were first “announced” via the online retailers’ case assortment listings, I was really hoping that one would be the awesome looking Hydra pilot/driver/biker design with the covered-mouth mask, and a different body, so I was disappointed we didn’t get one of those.  But these guys are still pretty cool, even if they are basically the same figure with just a different head and gun.  In fact, I would even go so far as to say that of all the bad-guy army-builders in any of the 3.75” Marvel lines, these are one of my favorite.

So, are these worth picking up?

As an army builder, I thoroughly enjoy these figures, and will say that they are well worth picking up if you can get your hands on any of them.  Their coolness really does seem to be relatively proportional to the number of them you have.  I think of them as the Imperial Stormtroopers or the Cobra Blue-Shirts of the Marvel Universe; they just don’t look right unless you have a bunch of them standing together.  If you’re not an army builder and prefer to to have only one of each different figure, they’re still nice, but nothing worth spending more than retail price on. 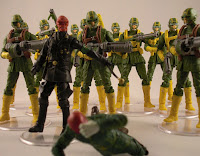