Marvel comics AND pinball?? Yes, please! Who doesn’t love two good things combined? I mean really, isn’t this the best thing since you got your chocolate in my peanut butter? Or did I get my peanut butter in your chocolate? Either way, put some comic book characters in a pinball machine, and I’m going to be one happy camper. Put them on my 4th gen iPod touch, and there’s a whole lot of portable fun going on.

I’ll admit, I haven’t played a whole of electronic pinball since the Bill Budge days. Believe it or not, there have been some improvements since then. Head on down to your local iTunes store, and you can pick up Zen Pinball for free. The price is right, so you can’t go wrong there. What’s more, you can now make in-app purchases for Wolverine, Captain America and Thor tables. 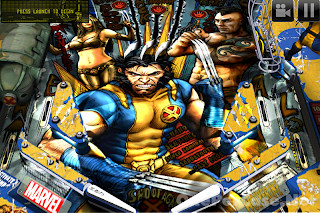 First up is Wolverine. You start with a skill shot that gives you the chance to topple a Sentinel for 500k, and it only gets better from there. The table is beautiful, with images of Wolverine, X-23 and Daken. Throughout the table, you get to battle baddies like Sabretooth, Silver Samurai and the Hand. Bumpers shaped like Sentinel heads, ramps to the fastball special, this game is loaded with great stuff. If this were a real game, this thing would have eaten many quarters by now. 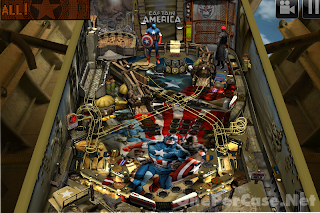 Next up is the Captain America table. Another feature rich game, the board displays a classic image of the Cap in action accompanied by some nice patriotic Cap type music. The Red Skull stands ready to battle you, while Baron Zemo makes the occasional appearance to come out and taunt you. The game features some great side play with a game where you have to deflect balls hurled at the Captain in order to save the Howling Commandos. When the board tells you that Cap’s Mission Hole is lit, get ready for some fun! No, no, no, I said MISSION hole. 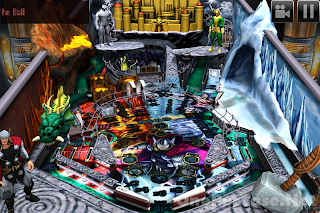 Finally there is a fun filled table for Thor. Head off into Asgard and get ready to take on Loki, Ymir and Fafnir. While this is the largest of the boards, it contains a lot of empty space to kick around in the center of the board. Don’t let that fool you though, you still have plenty of missions, and one nice huge ramp to run around at the top of the board.

The game has a lot of great features, including 10 different views to choose from, rich graphics, fantastic music and sound effects and responsive controls. My complaints are few. I would like to see a larger dot matrix display. There are a lot of great animations going on in the upper left corner of the screen, I wish I could see them better. I also found the difficulty a little tough at times. You’ve already got my money. You’re not trying to eat my quarters, so how about some difficulty levels? Other than that, this is good times. Zen Pinball is free, and the tables will run you between $0.99 - $1.99, depending on if you’re willing to wait for a sale. Considering 3 balls of real pinball will typically run you 50 cents to $1, that's a bargain. If these tables were real, they’d be right up there with TNG pinball as my favorite of all time.
Posted by Brett X at 4:14 PM