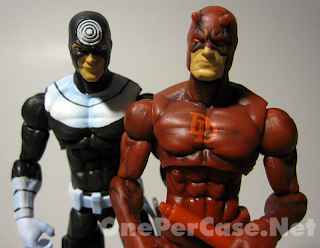 Just in time for the holidays, it’s another set of Marvel Universe comic 2-packs! This particular set is packed with two figures that you may have already picked up at the beginning of the line. Then you may have picked them up again when they were released with darker paint! Admittedly, I wasn’t overly thrilled when I heard about this set. I had planned to pass on it, but then Hasbro Toy Shop had to go and offer 25% off with free shipping. Well how can I say no to that? I'm not big on buying more of figures I already have, and am more or less happy with, but was it worth it this time? 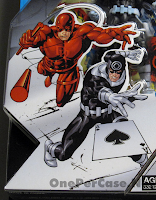 Any way you slice it, Bullseye is a pretty awesome character, even for a guy who is apparently named Lester. There’s a reason this guy often pops up high on “Top Comic Villains of All Time” lists. This figure does him justice, more or less. First, the less. He is unfortunately subject to all the common shortcomings of the Marvel Universe line. 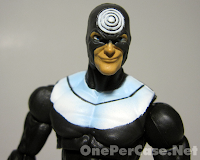 His paint job is surprisingly pretty good, but some of the joints (like the ankles) expose some unpainted areas. His articulation is good, but the gun holster does restrict his leg movement a little. His legs are prone to pop off if you look at them funny. Again, these are general MU complaints. The sculpt of the figure looks like a guy in a jumpsuit, as it should. The face sculpt is more or less well done, and he’s got a good sneer. 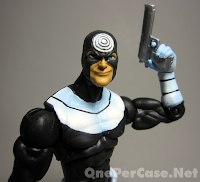 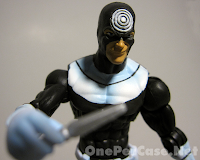 The gun is flexible, which helps for manipulating it into his hands. The throwing knife fits in his hand, but is a little small for how wide his grip is. My favorite part, there’s a working holster for the gun and the throwing knife. 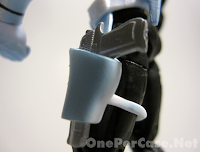 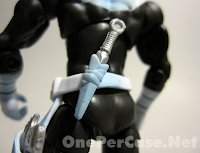 Now we’re on to Matt Murdock, better known as Daredevil. For a blind lawyer, he’s got a lot of staying power, despite Affleck’s bestefforts. Being more or a less a solid color, you don’t have the issue here with unpainted joints poking through, however you do have the same issues with the holster restricting his movements, so the cool crouching poses are out on this guy. 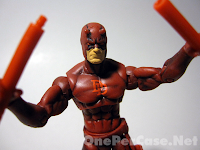 Speaking of the holster, the baton “fits”. You have to shove, and I wouldn’t recommend leaving it long unless you want to stretch out the plastic, but you can get it in there. It would have been nice if the baton had a string to attach the two ends, but it does come apart and snap back together well. 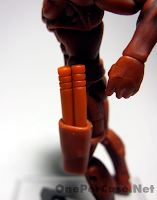 Overall, for a pack that I was hesitant to pick up in the first place, I was pleasantly surprised and glad that I did. Both figures are great representations of their comic versions, and are definite improvements over the original releases. Being figures we’ve already seen, I don’t expect this to be too hard to find on the shelves. Whether it’s your first time or you’re looking for an upgrade, this is a pack you’ll want to pick up.