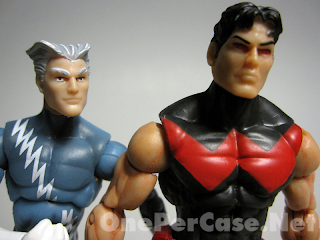 As a holiday gift (ok, probably not, no matter how you look at it), Hasbro has decided to bestow two all-new figures upon us in one comic pack. Help to round out your West Coast Avengers and Brotherhood of Mutants all in one crack.While you're at it, you ever get a nifty reprint of Avengers West Coast #60 so you can see the characters in action, just in case you're not familiar with them. I've been a long time fan of Quicksilver, so I was excited when I saw this pack announced. Besides, these are both fairly straight-forward characters, so even Hasbro couldn't screw these guys up, right? 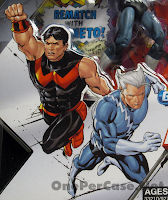 First up is Simon Williams, better known to most as Wonder Man. Yes, he is an Avenger, but I wouldn't go so far as to say he is one of the more popular Avengers. Still, I'm a fan of the character, so I was happy to see that he would be made. At this point, if you’re at all interested in this figure, you know what you’re in for in terms of articulation. You don’t get much variation there with this line. The sculpt is nothing fancy (this line heavily reuses parts) but gets the job done. The face and sculpted hair do a good job of looking like Wonder Man, and he’s got his signature red eyes. Over all, a solid figure. 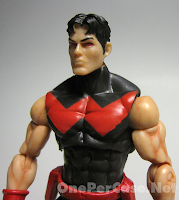 On the other side of the pack, you get Pietro Maximoff, aka Scarlett Witch’s brother, aka Magneto’s son, aka Quicksilver. He’s got a ton of affiliations, super speed and a bad attitude (which was wonderfully explained using an ATM analogy*). Fortunately, the MU line has enough articulation to pose this guy in a decent 700mph pose. I was pleasantly surprised that his legs didn't pop off at the hip while doing this, since this seems to be a fairly common phenomenon on recent MU figures. The uniform looks comic accurate, and he’s got his signature grey-white hair. The white highlights on the grey hair do a look a little funky, but not too bad. 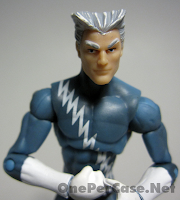 Overall, it’s a solid pack, but essentially presents exactly what you’d expect. It goes a little far to say I was disappointed in the set, but I wasn’t as excited about it as I thought I would be. It’s solid, but there’s no real wow factor here. As there’s no accessories (unless you count the comic) to comment on, the most you can really say about this pack is that it’s two character that you don’t have that feature the standard level of articulation and sculpting for the MU line. In the end, for the price (Roughly $15, depending where you shop) you get two new figures and a comic, which these days isn't a bad prospect. 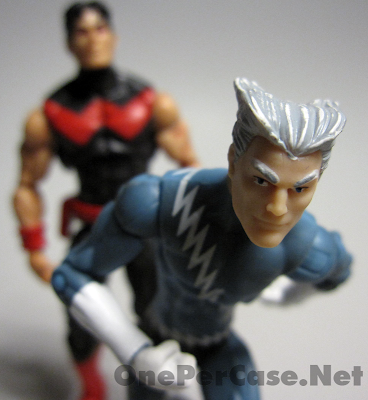 *He's explained to a psychologist that of course he's quick-tempered, irritable, and impatient — imagine a world where everyone is that annoying person who doesn't know how to work an ATM and you're behind them in line.
Posted by Brett X at 10:05 AM