I wasn't a fan of much of what went on during that series.  Every once in a while I liked it, like the explanation of Zartan's disguises.  Loved that.  Storm Shadow was designed at his worst with his emo hair and mask.  He seemed more comfortable in a band that hated themselves than fighting Snake Eyes.  I took ONE picture with that look.  Just one.  And I won't go back to it.  Here it is: 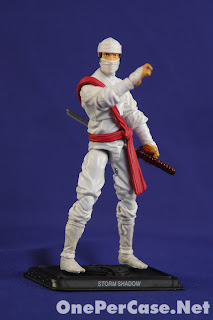 Some of you may like that look.  But to me, that is not Storm Shadow...

Now for the real review.  30th Anniversary Storm Shadow.  I wonder if we can petition for new card art... 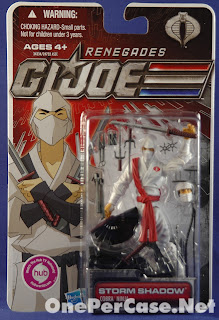 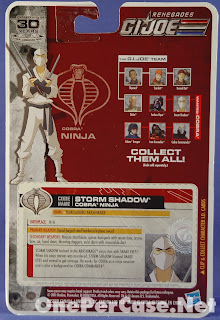 To start I must say that I don't need another Storm Shadow.  NOBODY needs another Storm Shadow.  But yet he was staring me down from the pegs.  What the hell, I don't have to open him and I can always return him.  Then I took the first carded pics.  Hmmmmm, look at all this junk under the printed cardboard nameplate.  It was then I decided to open him.  Now I am preaching about him.  This Storm Shadow is like the POC Snake Eyes.  The best Hasbro has ever done.  Comparable to the look of Sideshow's 12 inch.  (I usually refer to the POC Snake Eyes as the Sideshow SE)  I must note, the eyes on the "good" head are a little off, reminiscent of the Resolute Cobra Trooper. 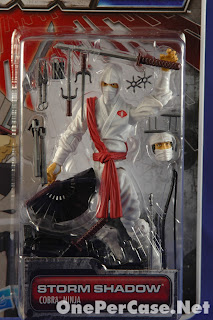 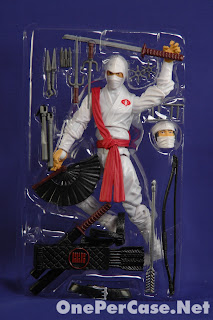 Let's talk gear.  Holy hell... a ton of it.  No place for it all.  I had to grab a container to hold all his junk.  I know I lose something... it is inevitable (which is why I will have to have another tucked away somewhere for when I do) .  Red Sash (Renegades), Black Sash Belt, Black Chest Strap, Backpack (Two Pieces), Two Swords, Two Sai, Nunchuku, Throwing Knives, a Fan, a Bow, One Loose Arrow(that fits in the backpack), Two Throwing Stars, Two Hand Claws, Wrist Dart Thingy (One is removable), and of course Two Heads (only one I care about).  That is an unreal amount of gear and I probably missed something. 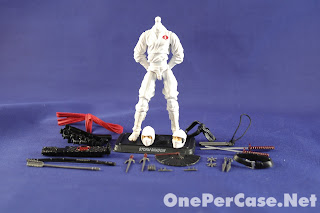 Ok, great...  He has a ton of stuff, but what about the figure.  I like the design.  I would rather have the bare arms.  His hands actually lost a little in sharpness in the cast, but make up for it in articulation.  I would also have preferred a different second head...  something like in this fantastic art (also the arms!): 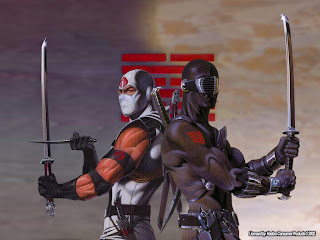 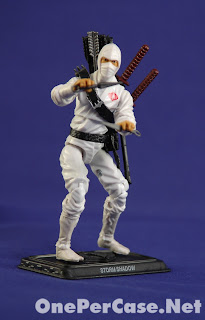 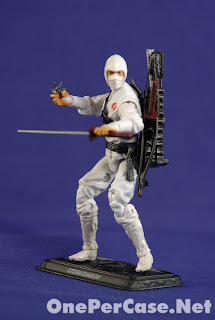 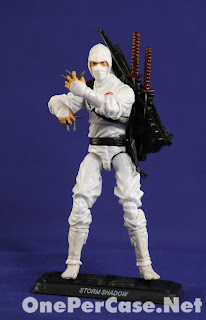 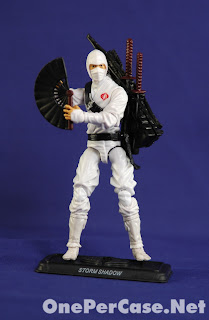 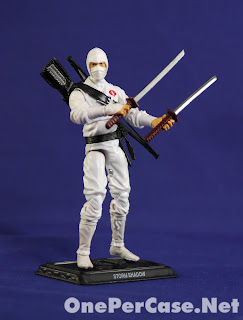 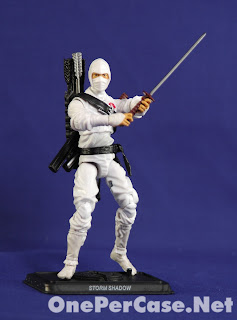 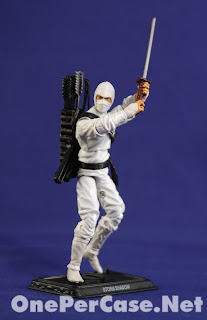 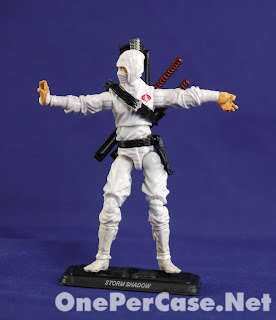 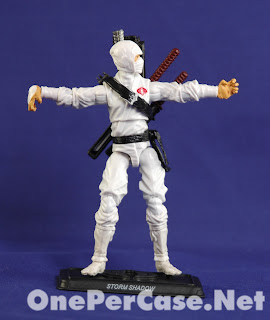 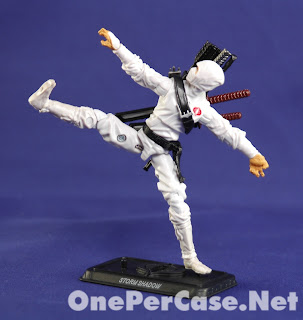 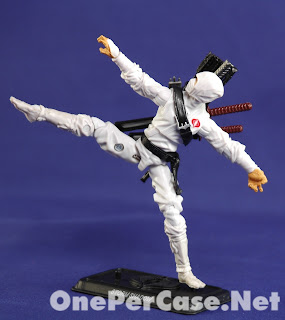 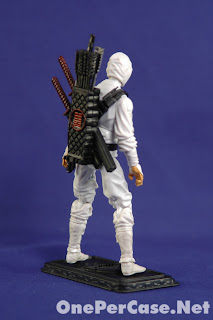 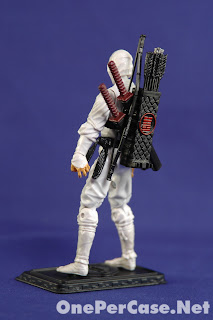 Notice the wrist dart add-on on his upper back near the right shoulder.  I had no other place to put it...

Now some close ups of the hands/feet 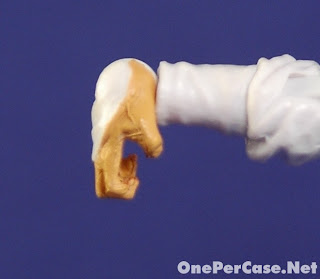 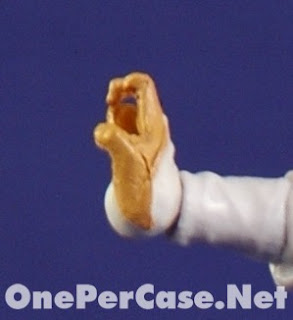 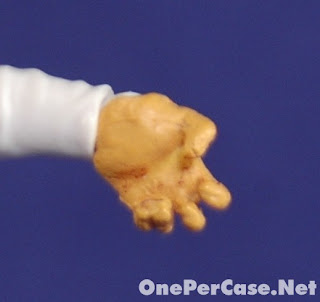 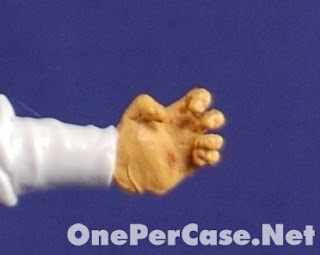 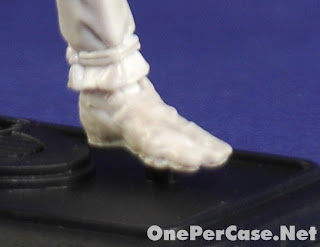 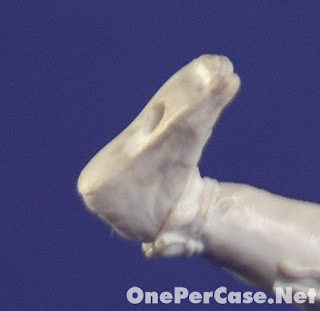 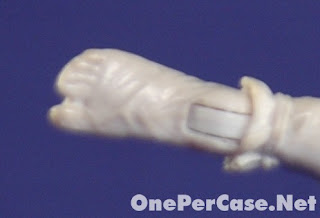 I love this fig.  Best. Storm. Shadow. Ever. 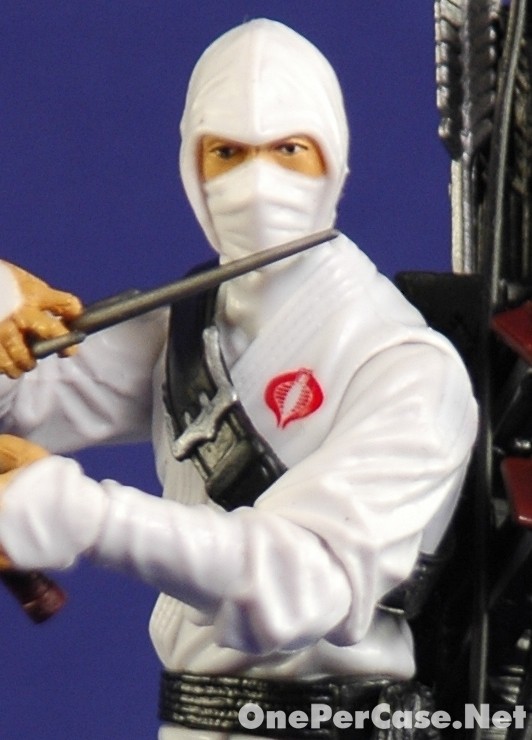