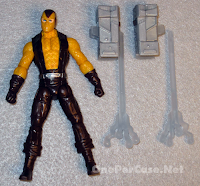 Herman Schultz, the Shocker. He’s a long-time favorite Spider-Man baddie, and like many I am glad to have him in the 3 ¾” scale. Oh, you didn’t know? Yea, somewhere throughout the year, Hasbro decided to sneak this guy into their Spider-Man line and ship him up to Toys R Us in Canada. For some reason, they still haven’t shared that info with anyone.


The Spider-Man line has given us a lot of more or less useless (to collectors, at least) Spider-Man figures, but it has also given us some really good versions of the Spidey villains like Venom, Carnage and Rhino. When it comes to the figures themselves, I would say Spider-Man is to Marvel Universe as Clone Wars is to the Star Wars Vintage Collection. The Spidey figures have some cool play features/accessories, but the Marvel Universe figures tend to have the better articulation. The Shocker follows in this trend. 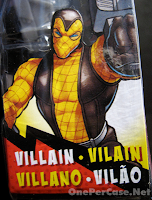 The Shocker’s sculpt is based upon the classic version of his costume, and does a good job representing it. It’s not overly detailed, but it’s detailed enough to keep me happy. The pants and vest are so-so, but the quilting on the yellow areas looks nice. His articulation, well, it could be better. His arms were a bit stiff, but once I got them moving I was able to pose him in a more or less typical “shocking” position. He does sport a nice pair of ball-jointed hips, but for some reason they don’t move particularly well. Due to this, he’s a little tough to get standing in a natural pose. 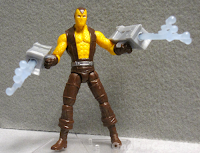 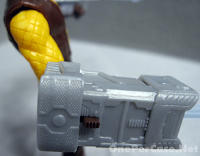 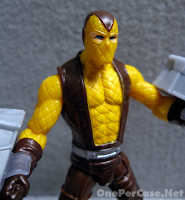 His “strike-missile” action feature… I don’t know. I’m sure that’s a lot of fun for kids. For me, I would have loved to see the addition of his vibro-smasher gauntlets as an added accessory. The launchers are just so big that they make him look awkward. Sooner or later, I’ll need to come up with a customized solution for the gauntlets (suggestions are welcomed).

Overall, he’s a good representation of the character, but the articulation and launchers/gauntlets were a little bit of a let-down. Is he worth picking up? For sure. Can’t complete your Sinister Syndicate collection without him, right? Is he worth driving to Canada or overpaying for on eBay? I think you can wait until he inevitably hits a retailer near you. 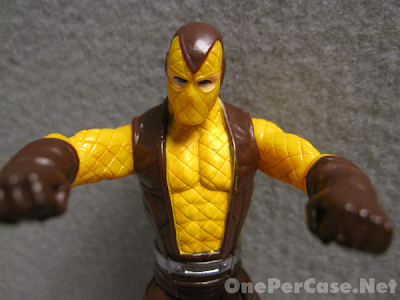