Straight out of the sewers, it’s Dr. Curt Connors, better known to most as the Lizard. Hasbro’s Spider-Man line has given us a handful of great Spider-Man villains, along with a pant-load of Spider-Man Oddities (Stealth Ninja, really?) Once again, Hasbro has delivered a great looking statue, but how does it hold up as an “action figure”?

The Lizard isn’t overly articulated, but they’ve given him enough to keep him in the running with, say, a vintage GI Joe. Head, shoulders, elbows, hips, knees. Good enough. I wish his tongue had the opportunity to move a little, but I suppose that could potentially make it more prone to snapping off, and who wants a Lizard without a waggling tongue? Scale-wise, he’s a big hulking menace, just as he should be.

The sculpting on the figure is pretty much top notch. The scales on the skin look great, his teeth look white and sharp, and his eyes look evil and yellow. The coat has a good wash on it making it look like a lab coat that’s been in the sewer without overdoing it. The Spider-Man line has been a champion of the action feature. In the case of the Lizard, his action feature is “Poseable Tail!” If I was a kid, I don’t know how excited I would be about that as a feature. As an adult who sits these things on a shelf, it works for me. It turns a potentially wobbly bi-pedal lizard-man into a nice stable tripod. 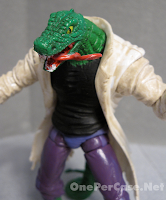 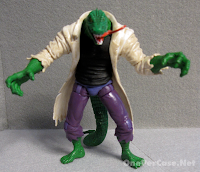 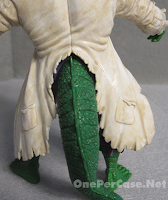 While I can’t say I’ve been excited about any of this line’s hero figures, I’ve been happy with most all of the villains. The Lizard is no exception. He’s a classic Spider-Man villain who makes a great addition to any Marvel collection. 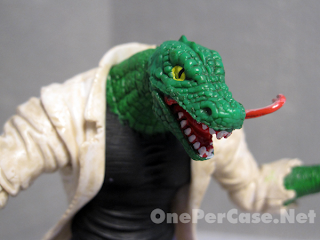