Nightwing DLC - In the Box and Played 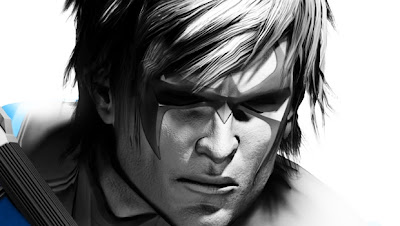 So... I've got the Nightwing DLC all downloaded... it came out on Tuesday. I got home from my normal Tuesday night shennanigans and got my controller all set and ready to play. Sadly, my worries were confirmed. Nightwing is only playable on the challenge maps and Riddler's Revenge challenges.

See Nightwing's face up top there? It looks all somber. Yeah... that's how I felt.

The maps that Nightwing plays on are all the same maps Batman and Catwoman play on. The Predator Challenges have some twists specifically for Nightwing since he has his own set of gadgets... but otherwise, yeah, they're the same. The other thing that I noticed and was saddened by... no snappy dialogue from Nightwing! The thugs all talk smack, but nothing from 'Wing himself! They could take the time to put in some VO work for the thugs but they couldn't get a voice actor to spend an hour or two spitting out one-liners? Disappointment there. BIG disappointment. They should have called me, I'd have done it for free :D

As for Nightwing's gear... he has some of the same gimmicks as Batman. Granted, not as many gadgets as Batman, but more than Catwoman. His arsenal includes Batman's grapnel, line launcher, jammer, and batarangs. Or, as Nightwing calls them, Wing-dings. Seriously... they're called Wing-dings.

Nightwing also has a few of his own unique items. He has his escrima sticks; which are his primary melee weapon, and have the addition of being a ranged option as well. THEY CAN RICOCHET AROUND CORNERS! I have yet to master this, but I look forward to it. He also has a dart launcher built into his gauntlet. Aside from the usual 'knocking the thug down' schtick, I've no idea what the darts can do.

In melee, Nightwing's escrima sticks can administer all sorts of shocks and electric jolts. His big stun maneuver is an electric AoE (Area of Effect) that will stun ALL of his opponents. Well, except for those that may be in mid-animation of standing up, they get missed. Nightwing has a great set of moves that heavily rely on his escrima and feet. Be careful timing your moves as a lot of them are multiple hits with just one push of your "Strike" button. You can prematurely kill your combo by button mashing. He certainly fits the middle ground of strength and speed between Batman and Catwoman.

Overall, I like playing as Nightwing and I only wish he was playable In-Game. In-Game play would allow for a lot more time to practice and get his moves down. Unfortunately, with this comes the realization that Robin will be the same as far as limited playability. Once again, disappointment. But I'll still download him. 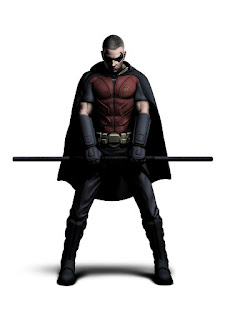 The Batman Skins DLC is due on December 6th. 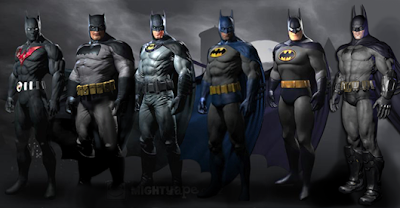 I so look forward to being Batman Beyond!