Marvel Universe - Guardians of the Galaxy

Guardians of the Galaxy

I’ll admit, I don’t know a lot about the Guardians of the Galaxy as a team. I am, however, familiar with the individual characters included with this set (admittedly though, I don’t know a lot about Groot). Being a Marvel Universe set that more or less contains four new characters, I was on the lookout for this set since I heard it announced. Let’s break it down figure by figure.

Groot. Well, Groot is essentially an accessory much like the Ant-Man and Wasp “figures” we’ve seen. But so what? He’s a little plant man in a pot, so what’s not to like about that? Yea, some people complain because they didn’t make a full-size Groot, but I don’t really know him terribly well as a character, so for me, he’s a cool accessory.

Rocket Raccoon is one of those names thrown around by fans under the “he’d be great, but they’ll never do it” category. Surprise! Here he is. Personally, I would have preferred his little green swashbuckling “classic” outfit, but this will do. This is essentially a statue with a moveable tail. I won’t really insult the concept of articulation by referring to this figure as having articulation. He doesn’t. He stands there and holds his gun reasonably well. For my purposes (standing on a shelf) articulation isn’t overly important. At least he’s in a decent pose. That being said, I like articulation, and if they can articulate a small Star Wars character like Wicket (the vintage version is great), then they could give this guy a couple of arm joints, no?

Star-Lord is a good looking figure. He has all the standard MU articulation, so it’s not just good, it’s good enough. The head sculpt looks nice and the paint on the body seems pretty accurate to the character. I believe him to be mostly recycled parts, but that’s par for the course for the MU line. In other words, if you don’t like recycled parts, Marvel Universe isn’t the line for you. I loved He-Man as a kid, so obviously recycled parts don’t bother me. Star-Lord looks like he does in the comics, poses well and can hold on to his guns. That’s really all I ask.

Drax the Destroyer is another character who I’d love to see in his “classic” outfit. Yes, the purple outfit with the gold belt. But this is a Guardians of the Galaxy set, so the pants/shirtless look is appropriate. As with Star-Lord, it’s probably recycled parts with a new head sculpt, but it works well enough. Not only does he hold his knives well, when you put them in the sheaths on the back of his belt, he is able to do a good job of reaching for them. Realistic movement, I like it.

So far, these sets have been selling pretty well at retail, but I don’t see this being too hard to track down, and well worth picking up if you’re into the Marvel Universe line. In the end, you essentially get three new figures and a cool accessory for $20, which in today’s action figure market is a pretty good bargain. If you complain about the size of Groot or the lack of articulation on Mr. Raccoon, I’m sure it was a cost issue. For Rocket Raccoon, more articulation means higher costs. If Groot had been done in a larger scale, this whole set would no longer be viable, or at least not at the same price point. If the Guardians of the Galaxy don’t fit as a part of the $20 series, they don’t get made. A more popular team like the X-Men? Sure (see the 6-pack). But the Guardians just don’t have that kind of selling power. 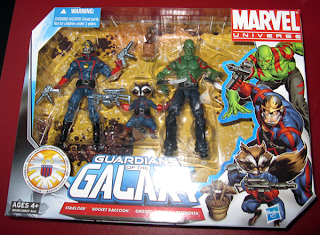 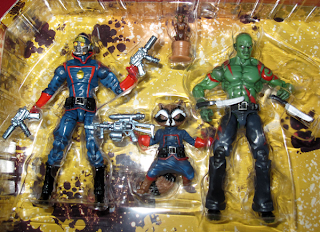 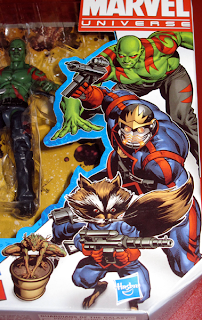 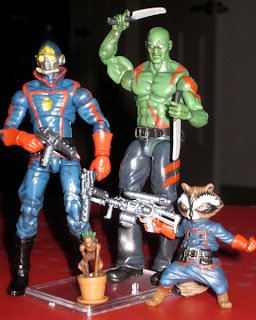 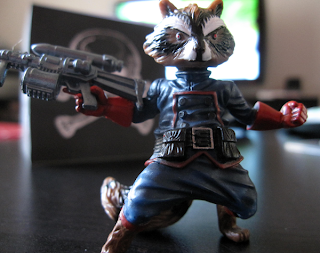 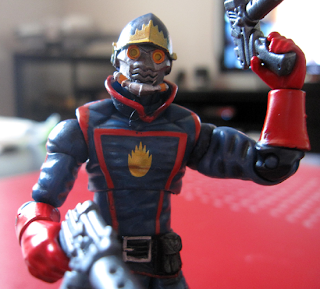 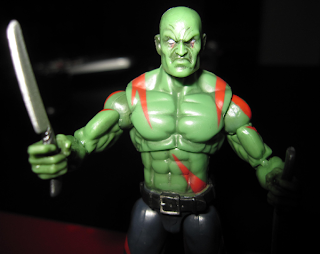 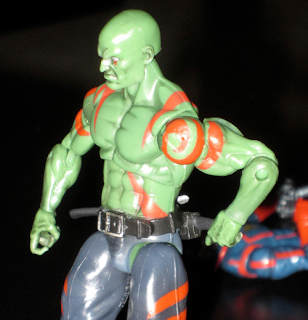 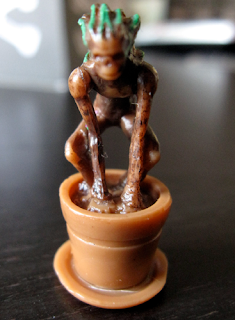 Posted by Jason Albrecht at 2:43 PM