The Clone Wars cartoon has left a lot of us with much to be desired. Thankfully, it’s served as a pool for some great looking figures. Personally, I’ve stopped watching the show because I have a feeling that if I watched it, I’d lose my interest in picking up said figures. Then again, that might not be a bad thing in the long run. 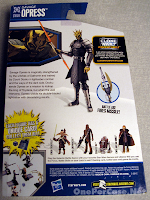 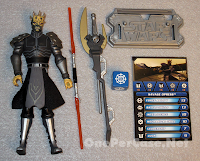 That being said, I present to you Savage Opress in all his armored glory. Based on the description on the back of the card, it sounds like they essentially wanted to send Darth Maul to kidnap Watto’s king. Since Darth Maul is dead, they had to make a new one. Hey, if they’re going to steal a character, at least they stole their own, and not a bad one at that. 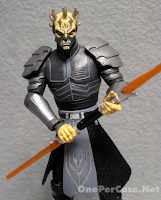 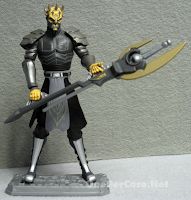 Like most of the Clone Wars figures, Mr. Opress has a great sculpt that (from what I can tell) is true to the cartoon. The face looks menacing, the armor looks solid, and he simply overall looks what he is, a hard bastard. He comes with the usual Clone Wars accessories, a card, a die, a stand and something that fires a projectile. In this case, he’s got some sort of vibro-axe that shoots, or can sit with the missile inside without it looking too obvious that there’s a missile inside, which I dig. Finally, he of course comes with the Sith baddie necessity, a double-bladed light saber. 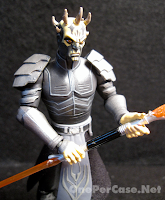 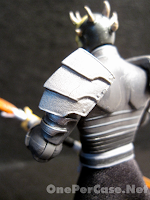 His articulation isn’t extreme, but it’s enough to get the job done. He holds either weapon fairly easily, and looks fairly natural while doing so. I had a little trouble getting him to stand on his own, but Hasbro is nice enough to provide a stand, so it’s a moot point.

Personally, my concerns over space and budget have forced me to become selective about how many Clone Wars figures I pick up. I decided I had room for one Savage Opress in my collection (the other being the shirtless version) and I’m feeling pretty confident that I’ve done well. He’s still pretty tough to find in most areas, but well worth picking up if you see him. 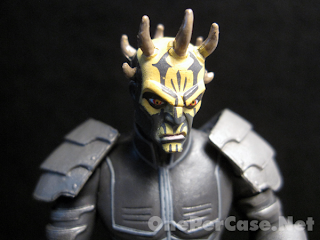