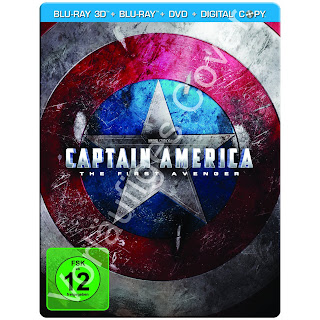 ...This one gets the chicks!
Blu-ray releases these days are such a hodge-podge of efforts.  From the basic one-disc release to the massive, almost unnecessary let's-release-everything-we-shot-and-who-cares-if-it-stinks releases (Cars 2, I can see you!!), Hollywood seems more interested in throwing everything at the wall to see what will stick.  For me, I love Steelbooks - these pseudo-metallic cases (mostly wrapped in what's called a Generation 1, or G1) look great sitting on your shelf.  Add some artwork behind the discs (like that of Jurassic Park), and you've got much more to the release than just the film.  To be fair, there's nothing wrong with a couple of special features to fill in the missing pieces of the story.  Hollywood's notorious for releasing movies with mixed bags of offerings.  But sometimes, they do something that makes absolutely no sense: they roll out better releases overseas than they do in The States.

Case in point: Captain America.  I loved the film - all the elements of a true superhero movie were there (respecting canon while bringing new audiences along, fun trivia that we'll talk about for years), all wrapped around a great summer flick.  Marvel has its mojo running now - even Austin Powers would be jealous!

So, why am I apparently dumping on the First Avenger?  Simply put, last month's release into American stores was seen as inferior to other films who saw a Summer 2011 release, an outright offense to fans of the comics who expected more.  Instead, we got one special release from Best Buy, which included an image from the first CA comic.  YAWN....Need to offer 'value' versions to keep Walmart-ers happy?  Fine.  But, don't forget those of us who shelled out bucks to see the original release several times.  In this case, Hollywood did not listen.

The unbelievable nature of this becomes worse when you learn what other countries are getting.  The UK release is top amongst those: it will feature a steelbook with Cap's shield and other interior artwork behind the disc holders.  They won't get theirs until December, but I would have much preferred this version to the one we got.

Huh?  Don't we fans deserve a proper release like this??  Sure, the features on the States versions are fine, almost palatable (see this link for a specific list of all features); but Marvel has not treated this or Thor's release with any sort of reverence to the fans.  Even the plastic case seems cheap.  Did we really deserve this?

It's one thing when American audiences get cheap releases of foreign films. Afterall, the movie studios in those countries want to maximize their investment, and import duties can be high. But when Hollywood botches its own releases, something is wrong.  They got X-Men right; got Fast Five right.  Even the POTC series and Jurassic Park were great.

Is Hollywood planning a Cap steelbook release for XMAS?  Not from what I've heard.  And, unless you know how to release your blu-ray to play region-free (which is easy BTW), American audiences might be passed by as Hollywood sends its best products overseas.  This is a tragedy, and something that should be corrected.  Listen to me Hollywood: American audiences will pay for great releases.  Give us a quality product, and we'll reach deep into our pockets.  Do anything less, and you risk a backlash of the very fans you are trying to court.
Posted by Matt Cummings at 9:33 PM