In late 2009, Arkham Asylum showed gamers that a superhero game can ROCK!  It was fun, it looked great, and moreover you were able to SCARE the bad guys!  You could get great gadgets.  What good would Batman be without his utility belt?  Sneak around, swing though the rafter on your batgrapple, hang upside down and grab thugs, and quietly take down dozens and dozens of punks.  What was not to love?

Fast forward to the present day.  Arkham City is due to hit October 18th.  Just a few days from now, we will once again be kicking the butt of the underbelly of Gotham City.  And Toys R Us is giving us an exclusive Arkham City Figure with the game (and the classic colors game skin).  Fantastic!  Rumors of the figure leaking before the release of the game came into the action figure community earlier this week.  Toys R Us employees were putting the figs on the shelves and letting them be snatched up by those not buying the game (which I don't mind, please save some for the pre-orders!)  I called the store where mine was reserved and made sure they knew.  A couple days later I wandered into another TRU and there he was in all his Blue and Grey glory staring at me from the shelf.  I couldn't stop myself.  Armed with a DC Universe 6 inch $5 off coupon I approached the checkout and purchased him for around $11 after tax.  And I love him.  I love the fact Mattel redid the chest for the logo.  The Arkham Batman had a large raised bat on the chest on the previous release.  I have only one complaint about the figure: I do NOT like the painted eyes.  On any of the Batman figs. 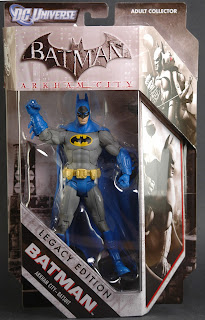 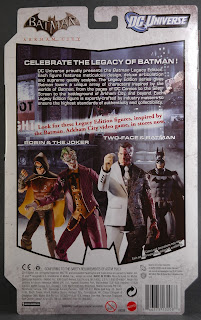 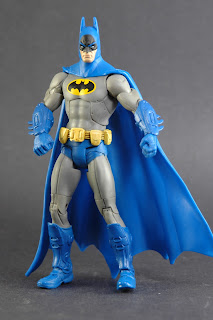 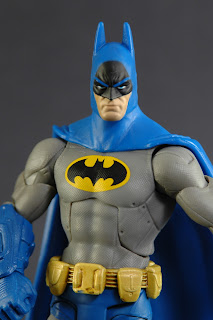 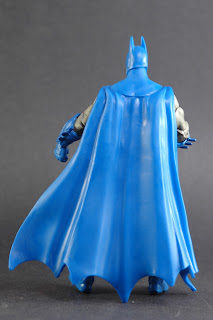 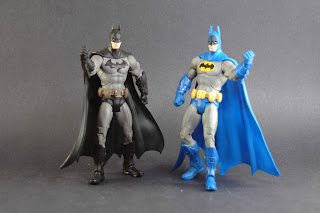